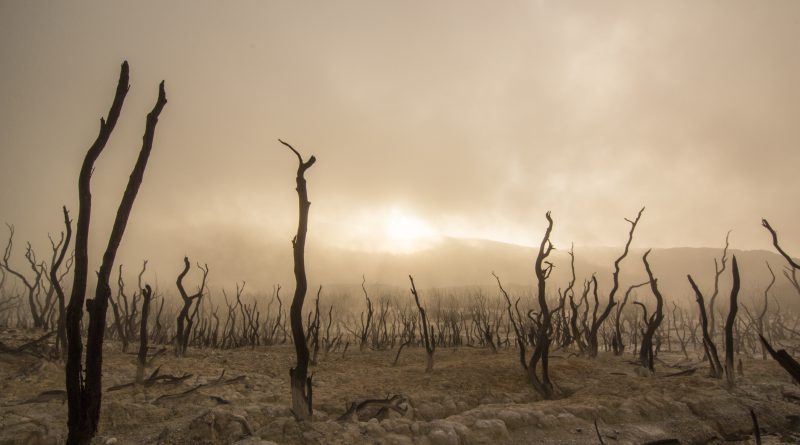 Indonesia’s forest is burning. Around 8,100 square miles of land, almost equivalent to the size of New Jersey, is in flames. According to the World Resource Institute, the daily emissions from the forest fires since the first week of September are larger than the average daily emissions produced by the entire U.S. domestic economy.

Forests burn naturally, especially in a hot climate like Indonesia. And fires are nothing new. In fact, fires have burned every year for the last decade. But officials from Indonesia’s National Agency for Disaster Management claimed that almost 99 percent of the fires are not naturally caused. Illegal land clearance by big pulp and palm oil companies and small farmers has become a common practice, according to local news reports. Historically, Indonesia has always been able to put out the fire in two or three weeks. Now, thanks to global warming and El Niño, it is single-handedly on a streak to break the global carbon emission limit. The trans-boundary haze has reached as far as Phuket in Thailand, affecting more than 40 million lives in Indonesia and millions more across Brunei, Malaysia, Singapore, and Thailand.

In mid-October, my aunt, who works in Jambi, a city on the island of Sumatra, told me she could barely see beyond 300 meters (0.18 miles). She is unable to flee because the airports are closed.

“Imagine watching a movie from the ‘50s with a sepia tone. That’s how bad it is,” she said.

In the most affected areas the Pollutant Standard Index (PSI) can reach almost 2,000. Anything above 300 is hazardous; 2,000 is catastrophic. According to the National Agency for Disaster Management of Indonesia, the fire has taken 10 lives and more than 500,000 people are suffering from an acute respiratory infection, including children and pregnant mothers.

The direct impacts are not the fire’s only toll. More than 1.5 million students in Indonesia and Malaysia face the horror of being left behind by the already poor quality of the education system. Their schools stopped operating in late August and many have no plan to reopen anytime soon.

After weeks of bickering, Indonesian officials finally admitted they are struggling to stop this man-made disaster, according to Tempo, a national news agency. Indonesia asked Singapore, Malaysia, Russia, and Japan to provide water-bombing aircrafts, the Wall Street Journal reported. On October 26, America finally chimed in and said it would contribute a $2.75 million to bolster current efforts. But, even with this help, scientists from the Center for International Forestry Research predict this inferno will last until early 2016.

Indonesia needs to put out the fire in the short run, but needs to improve law enforcement to prevent the crisis from happening again. The problem is rooted in Indonesia’s dysfunctional decentralization. Multiple and overlapping land permits can be issued by any district or provincial government or even ministries. Irresponsible land users exploit this lack of unison. On November 1, the governor’s office in Central Kalimantan was burnt down. The source of the fire hasn’t been identified, and it is suspected that evidence of illicit land permits has been lost in the fire, according to Kompas, a national news agency. Officials from the Ministry of Forestry and Environment admitted to CNN that they lack the relevant expertise to build evidence and present cases against the perpetrators to the judge.

It is no secret that this crisis is commercially driven. According to Greenpeace, satellite observations from August 1 to October 26 show that two in five fires start inside logging or plantation developments. Another two of five start in areas where pulp and palm oil companies have “concessions,” a long-term land lease from the government with permission to use it for their business. Their data also shows that 40 percent of those fires in pulp and palm oil concession areas are peat land area, which are very prone to burning and can store up to five times more carbon than tropical forests.

Around 413 companies are suspected to have conducted illegal land burning. Only 23 are currently under administrative investigation. None of those lists have been released to the public. With this lack of transparency, potentially none of the companies will be held accountable for fires that cause losses running into billions of dollars to the region.

In a brief meeting with Indonesia’s president on October 26, U.S. President Obama stressed the importance of “the strongest possible targets and agreement” in the upcoming climate talks in Paris. Despite acknowledging the “current difficulties surrounding peat fires,” neither spoke of the root cause and how to prevent them.

The forthcoming COP21 Climate Talks might lend momentum for stronger laws and enforcement for land usage as prevention. It’s a chance for citizens to push for stronger enforcement for the pulp and palm oil industry that has violated sustainable practices. The culprit suffocating millions must be held accountable.

As Singapore’s Minister of Environment said, this is “a man-made tragedy and a crime.” Without people pressure, this will again be another year where Goliath defeats David. The world’s oldest rainforest will continue to burn, and hope of a global emission limit becomes a faint dream.

Dyah is currently pursuing a master of public policy at Harvard Kennedy School. Prior to that, she served as an Associate Director in the Indonesian President’s Delivery Unit for Development Monitoring and Oversight (UKP4), conducting policy analysis and supervision in the field of education. Before joining the president’s delivery unit, Dyah started her professional career as a consultant in the global management-consulting firm, McKinsey & Company, assisting various companies in Southeast Asia.

Photo via user Dikaseva on Unsplash