Home > Articles > Trouble in the Neighborhood: Mexico’s Search for the Missing 43 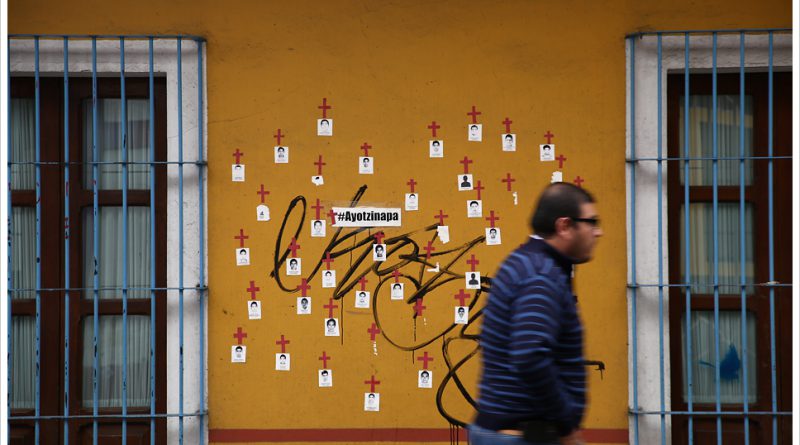 Things have not been quite the same in Mexico since Sept. 26, 2014. It is hard to know for sure what happened that day, and with the release of a report on Sept. 6, 2015, almost a year after, it became painfully obvious that we may never know. What is certain is that 43 students from a rural school in the southern state of Guerrero went missing. Three additional students were found dead, including one showing gruesome signs of torture, such as removal of the skin on his face. After a year of clamoring for truth and justice, the families of the ‘normalistas,’ as they are known, still demand that one question be answered: What happened to those boys?

The official government investigation established that local police, under the command of the corrupt mayor of the town of Iguala, handed the students over to a local drug-trafficking gang to prevent them from causing disturbances in a political rally. They were then taken to a nearby dump site and burned. The government called this version the “historical truth,” despite repeated expressions of doubt by the families and an independent forensic team from Argentina. In an effort to lend credibility to the investigation, an invitation was sent to an Interdisciplinary Independent Expert Group appointed by the Inter-American Human Rights Commission (GIEI, the Spanish-language acronym) to conduct an independent query. On Sept. 6, the group concluded that the government’s version was scientifically implausible.

At best, the results of the independent probe are evidence of the lack of institutional capacity to investigate difficult cases such as this one. At worst, they reveal worrisome incompetence or even wrongdoing, especially in light of destroyed evidence and the continued refusal to allow the GIEI to interview the Army 27th Battalion, some of whose members are said to have been keeping watch the night of the attack.

At the same time, government willingness to cooperate with an international, impartial, professional group, such as the GIEI, indicates a move towards openness that is reassuring, especially after less than friendly responses to criticisms by the UN Special Rapporteur on Torture and the Argentine Anthropologic Forensic Team. Another step in the right direction was the official reaction to the group’s findings. The Attorney General announced that her office would carefully review the recommendations and extended the GIEI’s mandate until their investigation concluded. The President is set to meet with the families of the students in the coming weeks.

Corruption and negligence in Mexico are very much to blame for the fate of the ‘normalistas,’ but that is only part of the story. The GIEI’s report puts forth a possible motive for the attack that had previously not been considered. It is one that shows, once again, that the destinies of the United States and Mexico are very tightly woven. According to the report, on the day of the attack, the students stole five buses from the local terminal with the intention of driving them to a protest in Mexico City. The experts say that it may be possible that one of those buses, unbeknownst to the students, was carrying a large shipment of heroin from Guerrero to Chicago. Whoever ‘owned’ the shipment might have ordered the attack.

The GIEI claims that this method of opioid trafficking is common in recent times in Guerrero. It coincides with reports of a surge in heroin use in the Northeast United States. The situation is so bad that in August 2015, the White House announced a response program that spans the 15 states in the region. Back in January, the Governor of Vermont referred to it as a “full blown heroin crisis” and called for a renewed treatment-based approach to confront the problem. And while these actions are necessary, trying to fight the problem strictly on U.S. soil is an incomplete solution. The United States must renew its approach by speaking out more forcefully against corruption in Mexico and by working with the region towards a new drug policy.

The United States has a golden opportunity to move away from its prohibitionist approach to drug policy during the upcoming UN General Assembly Special Session on Drugs (UNGASS). The session was set to be held in 2019, but Mexico successfully pushed for a sooner date in light of the tragic loss of life it has suffered as a result of the drug wars in recent years. The session will be held on April 19-21, 2016. If the fight against transnational organized drug-related crime is to be successful, there needs to be at least a regional or even a hemispheric or multilateral approach. The UNGASS is a promising place to begin.

Coming back to the disappearances, it is disappointing that the U.S. reaction has been so lukewarm. President Obama hosted his Mexican counterpart in a state visit barely three months after the students disappeared, during which he limited himself to explaining that the U.S. commitment is to “be a friend and supporter of Mexico in its efforts to eliminate the scourge of violence and the drug cartels.” There was no mention of corruption or the need to conduct a thorough investigation. The GIEI’s report warranted no comment from the State Department, not even a press release from the Embassy in Mexico. The United States should continue to be a friend and supporter of Mexico by responding with less ambiguity. It could begin by issuing a strong statement in support of continued investigation of this case and even launch an enquiry into the possible U.S. destination of the alleged drug shipment. More importantly, it could implement a serious effort to curtail the flow of weapons from the United States to Mexico, which fuels much of the cartel violence.

This coming Sept. 26, thousands of Mexicans are expected to take to the streets, once more, to claim justice for the lost ‘normalistas.’ Let’s hope this time their Northern neighbors stand with them.

On Saturday, Sept. 26, 2015, Mexican student-artists will hold a performance on Memorial Church Porch, in Harvard Yard, in remembrance of the missing ‘normalistas’. We hope you can join us. Email Carla Novi at calitanovi@gmail.com for additional information.

Tania Del Rio has five years of experience as a diplomat with the Government of Mexico and is on her second year of the Master in Public Policy Program at the Harvard Kennedy School. She is President of the Harvard University Mexican Association of Students (HUMAS) and is passionate about finding ways to improve government’s ability to serve. She is also a proud new mom.