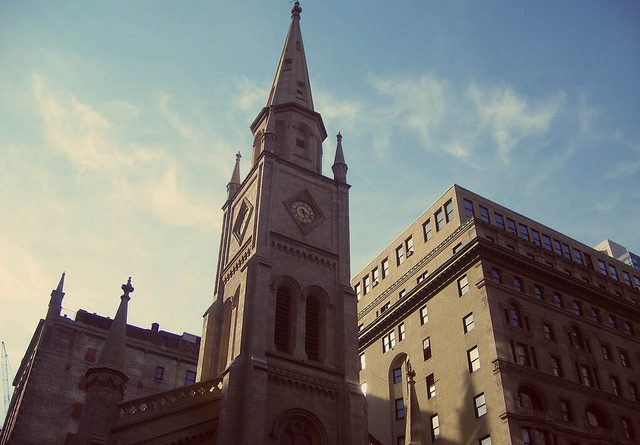 The Role of White Evangelical Churches in Urban Renewal

Over the past decade, cities have increased significantly in popularity. While the mid-twentieth century saw the rise of the suburb—due in part to white flight— the early twenty-first century is welcoming the rebirth of the city. According to the US Census Bureau, the country’s urban population increased by 12.1 percent from 2000 to 2010, while the overall growth rate was 9.7 percent during the same period.1 Given the challenges that many urban cores faced in the years following the race riots of the late 1960s and early 1970s, this newfound interest has generally been welcomed as an opportunity to breathe life into places long considered dead. But to limit this story to a happy ending without acknowledging the challenges this trend presents is tone deaf.

Much has been written about the appeal of cities to millennials, young families, fledgling entrepreneurs, and others desiring an alternative to suburbia.

Nielsen reported, “With the resurgence of cities as centers of economic energy and vitality, a majority are opting to live in urban areas over the suburbs or rural communities. Sixty-two percent indicate they prefer to live in the type of mixed-use communities found in urban centers, where they can be close to shops, restaurants, and offices.”2

At best, this trend is labeled urban renewal. At worst, it is called gentrification—a loaded term with little consensus. The influx of new faces to the city has led to dynamic economic shifts and significant demographic changes as long ignored communities have become popular almost overnight. While the growth of trendy boutiques, high-end coffee shops, and luxury condos may seem positive at first glance, critics say that these developments often replace the homes and stores previously inhabited and frequented by residents who cannot afford the newer options.

Churches—particularly white evangelical churches—have significantly increased in these urban cores. Though few have written about this trend and no one officially tracks all the new churches forming in renewing cities, Redeemer City to City, a popular organization that facilitates church planting, believes as many as 150 churches have been planted in Manhattan alone in the last decade.3 And while this change has been exciting for well-meaning Christians by giving them access to unexplored communities often just miles away from their hometowns, these individuals have found themselves responsible for many of the transgressions committed by other white transplants.

Efrem Smith, author of The Post-Black and Post-White Church and president and CEO of World Impact, a missions organization that facilitates church planting in urban cores while empowering the poor and developing leaders, spoke about these new white evangelical pastors: As one who was born and raised in the city, served as an urban youth pastor, and planted an urban church in the city where I was raised, I am amazed at the arrogance of some who come into the city from the outside with their models, principles, and values that they feel “led by God” to bring into and place upon the city.4

Smith’s words do not have to be the reality for these new urban congregations. White evangelicals can revitalize needy communities by using their privilege and power to challenge governments, businesses, and other individuals of influence.

Residents in disenfranchised communities often lack access to power players and decision makers that can implement the changes needed to improve quality of life. Congregations can invest in these neighborhoods by campaigning for well-developed policies that lead to systematic change. Doing so would show the existing residents that interest in them extends beyond Sunday service.

However, there are helpful and harmful ways to take this approach. In short, seeking to improve communities without partnering with existing residents that have long been present in these spaces is a good way to add gas to the fire between the haves and have-nots, cities and suburbs, whites and blacks, and even people of faith and the nonreligious.

One of the biggest mistakes pastors of white evangelical churches can make is not addressing policies that affect the poor. Coming to urban environments and endorsing policies that only benefit new transplants and businesses directs attention away from issues that have affected neighborhoods for generations. For example, supporting policies that make it easier to transform historical buildings into coffee shops is tone deaf in communities trapped in food deserts (no access to stores that provide healthy, fresh produce). Given that each urban area is different so are the concerns. Urban church planters should prepare to investigate low-performing schools, affordable housing, the absence of social services, and other problem areas.

Efrem Smith says urban church planting has to be about serving the underserved, not just following the latest trends: “We don’t simply need more churches in our cities. We need church planting and leadership development movements. These movements should specifically center on the empowerment of the urban poor. This will call urban church planting movements to connect evangelism, discipleship, and a liberating witness to the marginalized and outcast.”5

Whatever the partnerships between white evangelical churches and underserved communities, they must not reinforce codependent situations. Many people in underserved communities do not want to be coddled or locked in situations that leave them indebted to people in power. Soup kitchens and turkey giveaways may be popular, but they are temporary fixes that create dependencies. In his book Restoring At-Risk Communities: Doing It Together and Doing It Right, John Perkins, a minister and community developer with a long history of civil rights activism, wrote: “The great question is, ‘How do we affirm the dignity of people, motivate them, and help them take responsibility for their own lives?’ By beginning with the people’s felt needs, we establish a relationship and a trust, which then enables us to move to deeper issues of development.”6

If white evangelical churches do not intentionally create arrangements and support policies that help people take ownership for their destinies, they will reinforce many of the problems that exist between underserved communities and people in positions of privilege.

“Urban churches must collaborate because the social challenges are too massive for any one church to solve, no matter its size,” says Smith.7

When church planters from the white evangelical community spot a new community they would like to enter, there is often a perception that the community is “unreached,” meaning there are no churches in the area. There is not, and likely has never been, an absence of churches in underserved urban areas. What has existed is limited collaboration among these churches. Congregations may have different religious convictions, priorities, and even cultures. However, white evangelical churches have an opportunity to partner with existing urban churches to address many of the policy issues that their members confront within their underserved communities.

Gentrifiers often believe that cities are challenged because the existing residents are ill-equipped to respond to the problems affecting their community. This thinking leads outsiders to conclude that their assistance, perspectives, and skills are needed. However, more often than not, these new voices usually know less about the communities, especially from a historical perspective, than long-term residents.

Evangelical churches can avoid the white savior complex while still remaining engaged as long as engagement does not turn into control. And if churches want to remain major influencers in the greater culture—something that has become increasingly difficult for conservative churches as the American culture diversifies and becomes less Christocentric—they must engage cities but not at the risk of removing their power.

It is common for pastors wanting to plant in urban cores to have drawn conclusions about what they think is best for these communities before even setting foot in them. However, the needs of an underserved community are best observed by actually being present in the community. When it comes to understanding what changes will improve underserved neighborhoods, it is more effective to learn about the community and spend time with the residents or move to the neighborhood instead of just commuting for church services on Sundays.

Richard Perkins, senior minister of Christ Church Balham in London, wrote about the importance of coming in as a learner when planting in a new area: If we’re going to serve the community in which God has placed us, then we’ll really need to understand the issues that people face. We can approach this in one of two ways. The informal way is to “hang out” with the people who live there and listen to what they have to say. The formal way is to plunder the demographic information, study statistics, and read the last census . . . If we get this right, we’ll have a better chance of engaging them and not simply missing them with the gospel.8

Moll and Williams spoke to the problem of church planters not being rooted in communities: “They become tourists. They take all they can from the experience of living in the urban culture but never see the city as their home. When we don’t root our lives in the city then it becomes very easy to leave when things get difficult.”9

Housing costs in quickly gentrifying areas are among some of the fastest rising, forcing many long-term residents to leave their communities for more affordable housing often far away from the center of their lives. The New York Times highlighted areas in Brooklyn— formerly home to people who could not afford parts of Manhattan—now being too expensive for existing residents. As a result, some of these people have moved to New Jersey.10 Instead of responding eagerly to new developments planned for these neighborhoods, white evangelicals have the power to ask city council officials to demand that developers incorporate affordable and market rate housing into their high-end projects.

One of the easiest ways to help underserved people assist struggling schools by tutoring, fundraising, and volunteering.

Food deserts are also a very real problem in underserved communities. Lack of fresh vegetables, fruit, and whole foods lead to health issues, such as diabetes and hypertension, that disproportionately affect poor people of color.11 White evangelical churches can help to improve the health of many in the community by petitioning their favorite grocery chains to open in these areas and keep prices within reach for long-term residents.

As Dr. Martin Luther King, Jr. popularly said, “Sunday is the most segregated hour of Christian America.”12 And though that persists today and likely will not change, Dr. King’s words should not discourage white evangelical churches from planting in urban areas.13 If white evangelical churches take these approaches seriously, Sunday morning may still remain the most segregated hour, but black and white Christians working together can develop a prototype to improve underserved communities that other gentrifiers can follow.

Eugene Scott is a Master in Public Administration candidate at the John F. Kennedy School of Government at Harvard University. He has been a journalist for more than a decade, most recently focusing on urban policy issues including urban renewal and faith.

10.  Michelle Higgins, “Life After Brooklyn: Moving Out of Brooklyn Because of High Prices,” The New York Times, 22 August 2014.