Home > 2015 Issue > Book Review of My Promised Land: The Triumph and Tragedy of Israel by Ari Shavit 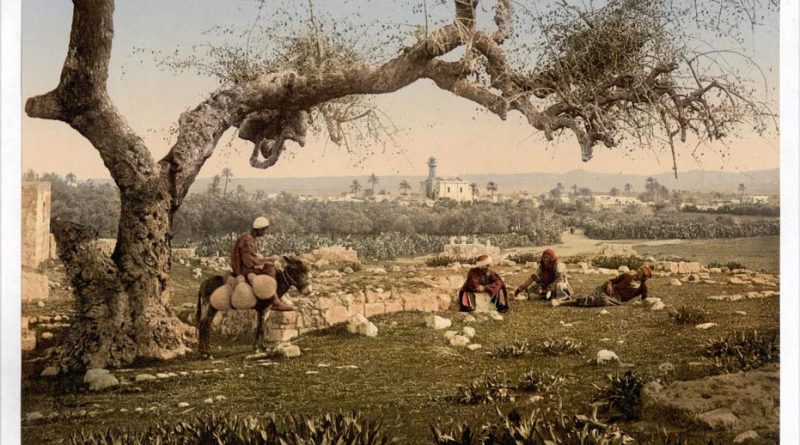 In April 1897, just months after Theodor Herzl published The Jewish State and launched the Zionist movement, a steamer containing twenty-one dreamers docks in Jaffa. They are a delegation of upper-class British Jews, and they have traveled to Palestine to investigate the prospects of settling the land with the persecuted Jewish masses of Russia, Poland, and Belarus. A prophetic fear of the extinction of the Jewish people— whether in the pogroms of Eastern Europe or the secularized assimilation of Western Europe—combined with a romantic Victorian yearning for Zion have inspired these pilgrims to leave the comforts of London for the deserts of Palestine. Leading the delegation is the Right Honorable Herbert Bentwich, the great-grandfather of the author Ari Shavit, a columnist for Haaretz and one of Israel’s most influential political commentators. As the steamer moors, Shavit pauses his narrative and asks himself, “Do I want him to disembark? I don’t yet know.”1

My Promised Land is the most widely acclaimed and commercially successful book on Israel of the last decade, receiving effusively positive reviews upon its publication in the United States. It is an attempt to understand Israel by telling its story from the arrival of Bentwich in Jaffa in 1897 to the writing of the book in 2013. Shavit thankfully rejects polemic for the most part, instead presenting a “personal odyssey,” an idiosyncratic but always gripping mix of family history, memoir, archival research, and interviews. Structured chronologically, each chapter pro- vides a snapshot of a historical moment set in a geographical location within Israel. Thus from his great-grandfather’s arrival in Jaffa in 1897, Shavit moves on to the 1920s and the pioneers of the Kibbutzim in Ein Harod, where “[a]fter eighteen hundred years, the Jews have returned to sow the valley,”2 and then onto the flourishing orange groves of Rehovot in the 1930s, before the bloodshed of the Arab revolts in 1936 shattered the illusions of the more utopian elements of the Jewish national movement.

The State of Israel’s first decade is evoked by the Bizaron housing estate, inhabited by quietly traumatized but obsessively industrious European Holocaust survivors. Other chapters include a fascinating account of Israel’s “ambiguous” nuclear project at Dimona, with which both Shavit’s father and uncle were directly involved, and an overwrought portrayal of the throbbing hedonism of Tel Aviv’s nightlife. Shavit has set out to write an avowedly centrist ac- count, appealing to the broadest possible spectrum of reader—hawks and doves alike. Thus, in the chapter containing his account of his own experience as a guard in a prison on Gaza Beach, Shavit can use words like “Aktion” and “Gestapo” and quote a fellow soldier who says that “the place resembles a concentration camp,” although Shavit himself has “always abhorred the analogy.”3 In another, however, he can provide an analysis of the existential threat posed by the Iranian centrifuges so hawkish Netanyahu himself could have written it. This dualism runs throughout the book.

Shavit is nostalgic for Israel’s more socialist past, tracing many of the problems he sees today to the victory of the right in the 1977 elections, which ended thirty years of rule by left-wing parties. He is a passionate critic of the occupation, viewing it as unjust and politically corrosive. At the same time, however, despite agreeing with the leftist peace movement on the moral illegitimacy of the occupation, he sees the “peaceniks” as naively deluded in their belief that withdrawing to some version of the 1967 borders would bring peace: “We should have been sober enough to say that occupation must end even if the end of occupation did not end the conflict.”4

On this logic, Israel need not wait for a deal with the Palestinians but should just take unilateral measures to “gradually and cautiously withdraw” from the West Bank.5 Given the unlikely prospects of any successful negotiated settlement, a unilateral withdrawal of this sort, which Ben-Gurion himself advocated immediately following the 1967 war, increasingly represents one of the few remaining responses for Israel to remain a Jewish and democratic state. After Operation Protective Edge in the summer of 2014, however, popular support for any risky disengagement from the West Bank is at an all-time low. At the same time, Shavit is clear-sighted about the dangers of de-occupation—especially the potential for the rise of, in Netanyahu’s words, another missile- lobbing “Hamas-stan” just minutes from Tel Aviv and Ben-Gurion Airport. Shavit’s account, then, written in English and clearly targeted at an American audience, has much to interest all readers. In places, it is genuinely powerful and moving, most notably in its descriptions of Zionism’s almost miraculous nation-building, as malaria-ridden swamps are drained and deserts bloom. Ultimately, however, Shavit’s tale revolves around a core of gnawing, corrosive, confidence-sapping guilt over the foundation of Israel.

For all Shavit’s celebration of Israel’s national achievement, this anguished guilt rots away at Shavit’s moral faith in the Zionist project. It hangs over much of the book’s early chapters, with portentous forebodings of an impending catastrophe shrouding his description of Zionism’s every move, no matter how benign, from growing an orange to attending a violin concert. From the very first paragraphs of the book, when Bentwich is described as “still an innocent”6 when he views the Holy Land from his steamer—not yet damned for the fate of the Palestinians whose villages he “does not see”7 as he surveys it—guilt hangs over all the triumphs of My Promised Land. This self-flagellating contrition finds its defining apotheosis in one chapter in particular, entitled “Lydda, 1948,” which gained some notoriety when published separately in the The New Yorker. It de- scribes, graphically, the expulsion of thou- sands of Arabs from the city of Lydda in July 1948, as “Zionism carries out a massacre.” Shavit writes, “Lydda is our black box. In it lies the dark secret of Zionism. The truth is that Zionism could not bear Lydda . . . If Zionism was to be, Lydda could not be.”8 The events at Lydda are the realization of what was always going to be, from the moment Bentwich landed in Jaffa, an “imminent, inevitable tragedy.”9 Indeed, for Shavit, Israel’s history is always shaped by a “tragic decree,” by “eternal struggles”—in short, by “fate,” a word that appears an extraordinary number of times over the course of the book, with repeated injunctions to his fellow citizens to “recognize our fate [and] live up to our life’s decree.”10

For Shavit, war in the Middle East is an inevitable necessity, given the converging forces of Zionism and the Palestinians; there was no escaping Lydda, and there is no escaping a future of eternal war. Except that there was and there is. History isn’t Greek tragedy. The fates of nations are not con- trolled by the will of distant, arbitrary gods. The events at Lydda, and indeed the current events in the Middle East, are not and have never been inevitable. They are historically contingent, generated at least in part by specific decisions by individuals with moral agency. Lydda was not inherent in Zionism but emerged in the desperate maelstrom of a war of survival—the essential context, which Shavit downplays, of the simultaneous invasion of the nascent Jewish state by five Arab armies, in a war the Secretary-General of the Arab League promised would be “a war of extermination and momentous massacre which will be spoken of like the Mongolian massacre and the Crusades.”11 In Shavit’s ac- count, all Arab agency is subsumed into suffering passivity, merely waiting for a “tragic decree” to unfurl: “Lydda suspected nothing.

Lydda did not imagine what was about to happen.”12 But the Arab invasion followed the rejection of the UN partition plan by the Arab states, a rejection that was not fated or inevitable but a deliberate political decision. Even within the brutally bloody context of a war for Jewish survival, there was nothing inevitable about Lydda, given that numerous other Arab cities, such as Nazareth, saw no such massacres or expulsions. Shavit’s description of a unitary, monolithic Zionism, moreover, ignores the numerous debates that divided the movement from its very inception. For instance, John Judis has argued recently (in Genesis: Truman, American Jews, and the Origins of the Arab/Israeli Conflict) that the vision of a binational state envisaged by Zionists such as Ahad Ha’am could well have been realized had Truman acted differently in 1948.13 It is not true that Zionism required the destruction of Lydda. History is not fate.

This is true not only of the events of 1948 but of the whole subsequent history of the region. The long sequence of failed negotiations, plagued initially by Palestinian rejectionism and increasingly by the continuing announcement of tenders for settlement construction, does not stem from a decreed, preordained injunction but from the unfolding consequences of quite deliberate political actions. For all My Promised Land’s undoubted merits, the persistent, crushingly fatalistic view of history as an inescapably tragic destiny is a major weakness of the book. Blaming fate becomes a get-out clause, negating the need for the difficult decisions from both parties that will truly define the region’s future.

Ultimately, Shavit concludes, “There will be no utopia here. Israel will never be the ideal nation it set out to be . . . But what has evolved in this land is not to be dismissed . . . a truly free society that is alive and kicking and fascinating.”14 Israel is home to a “living people,” and the “Israel tale is the tale of vitality against all odds.”15 Given the tragedy of the first half of the twentieth century, this is no small triumph. It’s just as well Herbert Bentwich disembarked.

Sam Winter-Levy is the von Clemm fellow 2014–15 at the Harvard Graduate School of Arts and Sciences, studying history and international relations.

13  John B. Judis, Genesis: Truman, American Jews and the Origins of the Arab/Israeli Conflict (New York: Farrar, Straus and Giroux, 2014).