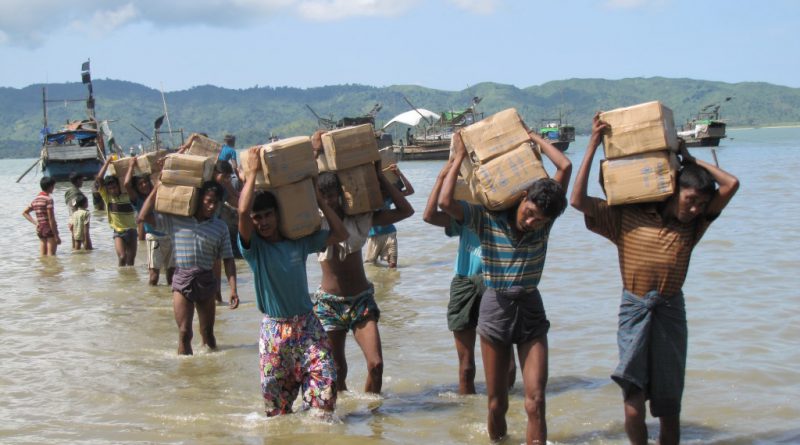 A global response will be the next test of civilization.

In July 1979, Vice President Walter Mondale addressed 65 countries’ delegation heads at the Palais des Nations in Geneva. They had convened to discuss the Indochinese refugee crisis, which, earlier that year, had reached a breaking point. The then-five members of the Association of Southeast Asian Nations (ASEAN) – Indonesia, Malaysia, the Philippines, Singapore and Thailand – had announced they would no longer provide temporary shelter to the thousands of Cambodian, Laotian and Vietnamese refugees fleeing from civil and interstate conflict in their home countries. Drifting aimlessly in the Gulf of Thailand and South China Sea, these refugees faced starvation and dehydration, violent pirates, and turbulent storms. Between 1978 and 1980, over 200,000 refugees were estimated to have perished at sea.

Concerned by what he would later claim in his speech as humanity’s attempt to “hid[e] in the cloak of legalisms,” Mondale saw the Geneva Conference as a somber opportunity to remind the international community of the repercussions of eschewing its responsibility to aid. At the podium, he recalled an all-but-forgotten international conference 41 years earlier when 32 countries met at the French resort town of Evian to discuss the resettlement of Jewish refugees. If, Mondale argued, each country at that conference had accepted 17,000 refugees, there would not have been Jews left in the Third Reich to send to the concentration camps. Unfortunately, those delegates of the Evian conference ultimately “failed the test of civilization,” in Mondale’s words, leading to the deaths of over 6 million Jews during the Holocaust. In his closing statements, Mondale exhorted his counterparts to action, claiming, “History will not forgive us if we fail. History will not forget us if we succeed.”

Mondale’s rousing speech was met with a standing ovation. A momentous international effort followed, resulting in an agreement where first asylum countries in Southeast Asia agreed to provide temporary shelter conditioned on third party countries (led by the United States, Australia, France, and Canada) finding permanent resettlement for the refugees. By the end of that year, resettlements had tripled to 25,000 refugees per month. By 1982, 623,800 Indochinese refugees had been resettled. Indeed, the thriving and vibrant Indochinese communities found today in the United States and around the world owe their thanks to Mondale and his stern warning to the international community of the potential consequences of humanity’s inaction.

Almost forty years later, however, the Rohingya – Southeast Asia’s new ‘boat people’ – do not have a Walter Mondale to advocate on their behalf. Thousands of Rohingya – a Muslim minority in Myanmar’s Rakhine State who have been persecuted for years by the state’s ethno-nationalist Buddhist majority – have faced the dangers of the elements, the treachery of human traffickers, and the abuse of smugglers in a desperate attempt for a better life in surrounding Southeast Asian states. More than 120,000 Rohingya have fled Myanmar since ethnic violence broke out in 2012 and of those who fled, over half left by boat last year and in the first quarter of 2015.

The international response has been underwhelming. Though a fraction of the Rohingya rescued were offered temporary asylum and shelter in Malaysia and Indonesia, regional and international commitment to solve the crisis has been tepid. The United States and The Gambia remain alone in publicly offering to resettle Rohingya. In May, The Gambia appealed to “all countries with a conscience to assist in bringing the Rohingya to The Gambia for resettlement.”

A special May 29 emergency meeting convened by the Thai Ministry of Foreign Affairs to address the crisis brought together non-senior representatives from 17 countries, but cooperation was obscured by an obsessive blame game. Furthermore, the lack of involvement from major powers in the region has been noticeable. Concerned that intervention in Myanmar’s internal affairs will adversely impact their bilateral relations with the resource-rich country, China and India have remained relatively muted in their response (even as India, for example, poured enormous resources into the humanitarian assistance and disaster relief effort for Nepal). Australia, once a lead in the Indochinese resettlement effort, was alleged to have paid Indonesian smugglers to send Rohingya migrants back to Indonesia. Australian PM Tony Abbott has neither confirmed nor denied the allegation. And Japan, the only Asian country to resettle refugees, stopped short this time of agreeing to accept Rohingya, even as it dished out $3.5 million in resettlement efforts, citing its long history of actively engaging in humanitarian assistance efforts as a motivation. In Southeast Asia, Thailand and the Philippines, struggling with Islamic insurgencies of their own, have been hesitant to accept the Muslim Rohingya. Even so, these governments have been remarkably quick to criticize Myanmar and Bangladesh for not doing more to rectify the policies that oppress the Rohingya or force them to live in squalid conditions in refugee camps on the Myanmar-Bangladesh border.

An enduring solution to the crisis will not come easily. Unlike the Indochinese refugees agreement where (1) the Vietnamese government cooperated and promised to limit the flow of refugees, and (2) an Orderly Departure Program was instituted so that refugees could apply for resettlement without leaving their homeland, the Rohingya have no such mechanism. Though the Rohingya trace their origins to what was formerly the Arakan Kingdom in present-day Myanmar, the Myanmar Government refuses to recognize them as one of the country’s ethnic groups and instead views them as illegal migrant Bangladeshis. Bangladesh does not recognize them as well and has refused to accept the newest refugees. The Rohingya thus remain stateless. Meanwhile, growing xenophobia and regional and international concerns that the marginalized Rohingya could join foreign terrorist networks have further diminished prospects for a concerted international effort to resettle them.

The lack of regional will to address the crisis means the international community, which also tends to be reactive, must capitalize on the opportunity to espouse a vision of active humanitarianism. The United Nations High Commissioner for Refugees (UNHCR) and the International Organization for Migration (IOM) cannot and will not change the policies that have become the underlying causes for this conflict: those privileges remain squarely with the state. However, they can support search and rescue operations, ensure international aid organizations have access to the migrants, and request punitive measures against human traffickers. Most importantly, they can also offer ideas for an international strategy to future crises of this sort – one that transcends politics.

The urgency for this sort of international strategy is clear. In 2014, the UNHCR released a report that showed the number of people forced to flee because of war, economic hardship, or persecution had surpassed 50 million for the first time since World War II. In Asia, almost half of those refugees are children. These numbers suggest that migrant and refugee crises will not recede; their growing numbers will outpace our ability to adequately respond.

In crafting an international strategy, the focus must be on on both building states’ capacity to respond and on socializing norms of trust and cooperation such that saving human lives in a refugee crisis becomes the top—and only—priority, regardless of political circumstances. To that end, UNHCR could execute a strategy that focuses efforts on establishing regional ‘refugee emergency response exercises,’ which, like naval exercises, confer a host of benefits to countries interested in enhancing interagency communication, sharing resources, and building capacity. Moreover, ‘refugee response exercises’ allow states to assess their resources and manpower, align those to the region’s, and then determine where best to contribute during a future refugee crisis, whether providing refugee camps, first asylum, or resettlement. This would mitigate the chaotic and reactive decision-making that materializes during such crises. Additionally, in facilitating the aforementioned operations strategy, UNHCR would also enhance its diplomatic and negotiating capital by mobilizing resources from other regional institutions, governments, and partner organizations for regional refugee crises.

An illuminating, albeit ironic example, of the potential in this strategy is the ASEAN Humanitarian Assistance Center (AHA), which coordinates the ten ASEAN countries’ disaster management offices in the event of a natural disaster or manmade calamity. UNHCR could make use of this mechanism and work with AHA to develop regional refugee emergency response exercises, dovetailing refugee assistance with the multiple priority areas under AHA’s humanitarian assistance and disaster relief (HADR) operations. The resources HADR can mobilize would provide sufficient capacity training for countries requiring operations support and refugee negotiations training.

But irrespective of what we ultimately do, the way we choose to address this refugee crisis will most certainly inform the limits of our actions in the next. Each time, the solution will likely remain inchoate and ephemeral unless we muster the political will resonant of our celebration of humanity over politics during the Indochinese refugee crisis. Otherwise, the Rohingya issue will continue to highlight our paralysis in viewing transnational issues through a global lens necessitating a global response. To be sure, in an international system with no world police, individual nation states retain the prerogative of sovereignty. It is this sentiment that has long justified the modern nation-state’s apathy during humanity’s darkest episodes. And, the question of not only whether a state should help, but whether it can help, is a legitimate one. States could imaginably defer assistance if taking in refugees led to social disorder or economic collapse.

In the end, however, excuses in a humanitarian disaster are just excuses – a convenient way to console future generations of present failure. When it comes to humanitarian disasters, we must strive for a reality where “the Age of Nations is past,” as French Jesuit philosopher Tielhard de Chardin said. Our altruism should not, and does not, stop at borders. It should transcend them. The numbers of refugees, Rohingya or otherwise, suggest that we are merely confronting the first of many transnational crises that obey no borders. If we fail to adequately prepare for and respond to the next crisis, then we will, once again, “fail the test of civilization.” The fate of the Rohingya, and of all who seek shelter from persecution, should not be decided by the cold pragmatism of the nation state, but rather by the better angels of our human nature.

Photo Credit: A Rohingya IDP camp near Sittwe that can only be accessed by sea with boats, by Mathias Eick via European Commission DG ECHO.

Derek Pham is a Master in Public Policy student at the Kennedy School from Huntington Beach, CA. He is spending his summer at the U.S. Department of State working on Southeast Asia policy.