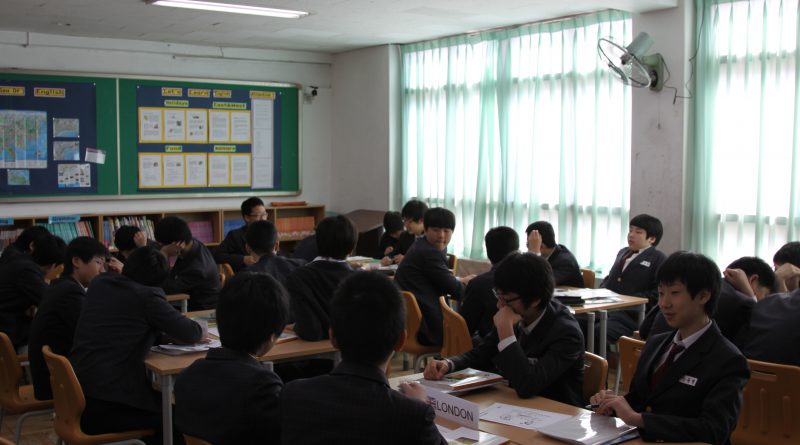 On the surface, South Korea’s education system has notable merits. In the OECD’s (Organisation for Economic Co-operation and Development) 2012 Programme for International Student Assessment (PISA) test, which measures the cognitive skills of fifteen-year-olds from sixty-five participating economies around the world, South Korea ranked fifth overall in mathematics, reading, and science.1 In the same year, South Korean students placed second, just behind Singapore, in the first OECD assessment of problem solving skills.2 US President Barack Obama has made repeated references to South Korea’s successful education system, even suggesting that American children are not adequately prepared for the twenty-first century economy because they spend less hours in school compared to South Korean children.3

While the United States and other countries applaud South Korea’s academic achievement, the deeper reality reveals an education system ruled by intense competition and an obsession with grades. Unless viable and equally rewarding alternatives to the standard post secondary pathway are made available, students will continue to sacrifice their health and creativity for South Korea’s  top position in international education league tables. Developing a strong, young social entrepreneurial sector that challenges cultural norms may be a solution to the education crisis.

South Korean society places an unusually high value on being admitted to one of the nation’s top three universities—Seoul National University, Korea University, and Yonsei University. Graduating from one of these prestigious universities is a golden ticket to the best jobs, social networks, and even marriage partners.4 Among OECD countries, South Korea has the highest proportion of twenty-five to thirty-four year-olds with tertiary education.5 With so many students vying for limited spots at top universities, the competition is especially fierce.6 Consequently, this has forced K–12 schools to focus on test preparation and rote memorization while neglecting creativity, self-expression, and discussion.7 An article by the BBC, “South Korea’s Schools: Long Days, High Results,” reveals the dark side of South Korea’s education system through the story of Hye-Min Park. Park, a teen- age girl living in the affluent Gangnam district in Seoul, studies for more than thirteen hours each day, waking up at 6:30 a.m. for school and studying until 11 p.m. at an after-school hagwon (cram school), where she continues to learn academic material necessary for the college entrance exams.8

Research confirms that Hye-Min’s story is not an isolated incident. According to Statistics Korea, in 2013, nearly 70 percent of students from grades one to twelve took part in after-school activities. In total, South Koreans spent over $18 billion on after-school programs. Additionally, individual families paid $239 each month per child, about 80 percent of which was allocated to after-school academic programs.9 Although it is difficult to measure the actual hours students spend studying, it is reported that South Korea’s middle school students sleep an average of six hours and thirty-nine minutes a night, which is considerably lower than the recommended eight hours and thirty minutes. More worrying is that older students in high school sleep even less, on average five hours and forty-five minutes.10

This obsession with academic competition is causing more serious damage than just disturbances in sleep cycles. A 2014 Korea Health Promotion Foundation survey of fourteen through nineteen-year-olds found that about 65 percent of respondents expressed feeling severely stressed about future uncertainty and school grades.11 Even more disturbing is that 2012 South Korean government data revealed that, for the sixth time in a row, suicide was the leading cause of death for young people between the ages of nine and twenty-four.12

Although students are pushing their limits for academic success and prestigious careers, South Korean employment trends paint a gloomy picture for job prospects. The 2013 report by the Korea Research Institute for Vocational Education and Training found that 24 percent of college students are employed in jobs for which they are overqualified.13 This phenomenon  of overeducation of the population has been on the rise since the 1990s.14 Although college graduates generally earn higher salaries than high school graduates, a four- year liberal arts college degree no longer guarantees stable employment in the government or at a multinational company like Samsung. South Korea’s education system is misleading students to believe in an elusive dream that, in reality, can only be claimed by a small minority.

There have been various attempts to make education less burdensome for students, such as introducing policies to reduce the dependence on private tutoring and hagwons.15 However, these policy reforms have been unsuccessful at reducing the intensive academic pressure that is negatively affecting South Korean youth.

A tragedy involving hundreds of high school students refocused the national dialogue on youth welfare. On 16 April 2014, the passenger ferry Sewol sank and killed 295 passengers,16 including 250 high school students from Danwon High School who were on their way to a field trip.17 As South Koreans mourned for the young victims, the ferry announcement repeatedly made to passengers on the sinking Sewol—to “stay still . . . it is more dangerous if you move”—became a powerful symbol. Journalists, politicians, and public servants used it as an analogy to discuss broader societal problems, especially as they related to education and South Korean youth. Just as in the Sewol tragedy, could it be that the older generation is misguiding the younger generation to stay put in a broken education system?

Despite the sense of confusion and helplessness that overcame the nation, hope remains for the next generation. During the Sewol accident, seventy-five Danwon High School students refused to obey the crew members’ instructions and survived by escaping the sinking ship.18 In the larger South Korean society, there are also youth who are challenging the order to “stay still” and daring to move away from the traditional education model.

Daring to Move, Moving to Change

There are a number of ways young people can abandon the linear path suggested by South Korea’s rigid education system and society. However, one special group of millennials is choosing a different path and also looking to help others along the way. Young social innovators, a group distinctly different from the stereotypical image of South Korean youth, are breaking the educational mold by pursuing their dreams of effecting positive societal change.

The story of Kyung Sook Yang exemplifies the mindset of many young people who are involved in South Korea’s social innovation sector. After graduating college with a degree in economics and finance, Yang joined a large corporation that would provide her with a financially stable life. Although this is a dream come true for many, Yang was not satisfied with her office job and decided to try something different—she left her company and travelled to Finland and the United Kingdom in search of the “good life.”19 After returning home, she joined an education social enterprise, Headflow, and was later selected to lead The School of Courage, an organization that promotes creativity and provides support for youth and adults who want to explore design thinking and social innovation.20

Young social entrepreneurs like Yang are spread across the country, but many are centralized in Seoul because of the prevalence of support networks there. One government-sponsored center in Seoul, the Youth Hub, is dedicated to mentoring and growing youth social enterprises. The Youth Hub is part of the Seoul Social Innovation Park, which also houses the Seoul Social Economy Center and Seoul Creative Lab. Although located in Seoul, it is open for anyone across the country interested in the field.21

In September 2014, the Youth Hub hosted its second annual Seoul Youth Hub Conference “Reshaping the Way We Live,” where young South Koreans came together to think creatively about ways to improve society. The various social enterprises that attended the conference represent the wide spectrum of innovative and creative programs these young entrepreneurs are dreaming up and founding. For example, NSPACE offers co-working office spaces to small companies. Another social enterprise called Norizzang designs furniture from recycled products and hosts an open woodworking space. The Awesome-School provides after-school and weekend programs that teach students to discover passions that are not readily taught in schools, such as fashion and 3-D printing.22

Towards a Happier Future

South Korea’s young social entrepreneurs are challenging the notion that success is defined by admittance to elite colleges and prestigious jobs. By choosing a career driven by their passion for social entrepreneurship, these young Koreans are more creative and satisfied and, at the same time, are helping to redefine socially entrenched beliefs that have held youth captive to a stressful education system. However, many obstacles threaten the viability of South Korea’s social enterprises.

For example, the social enterprise is a nascent business model in South Korea, with only about 1,200 registered social enterprises as of February 2015.23 While the South Korean government’s Social Enterprise Promotion Act of 2012 provides some needed support for creating startups, the government has failed to provide adequate resources for the continued growth of established social enterprises.24 In order to support this important sector, more programs are needed to provide social entrepreneurs with sufficient support and realistic advice on the financial viability of their businesses.25 The KAIST Social Entrepreneurship MBA program, which was launched  in 2013, is a model example of a highly supportive incubation program. Although the program is limited to twenty-five students per cohort, all enrolled students are entitled to various benefits such as access to mentoring, incubation facilities, investor-matching opportunities, and significant support from industry professionals and academics.26 In addition to such programs, creating incentives for investors, mentors, and researchers interested in social enterprises will create a more robust sector.

Lack of public awareness also hinders the growth  of social enterprises. A 2009 survey conducted by the Korea Social Enterprise Promotion Agency found that about 50 percent of respondents “do not know what a social enterprise is.”27 Similarly, a 2014 survey reported that about 90 percent of respondents have never bought products or services from a social enterprise.28 In addition to creating a viable support network for youth entrepreneurs, it is imperative to increase public awareness of social enterprises. Continued industry-government discussions, campaigns, and public forums can help promote social enterprises, which are often less visible in the mainstream media compared to the more profitable ventures such as those specializing in IT, biotechnology, and entertainment. Through these efforts, youth who have a passion for social entrepreneurship will have enough support that they will pursue it without fear of social taboo or failure.

Although youth social entrepreneurs present a hopeful sign for South Korea’s youth, it is naive to think that they alone can solve the complex education crisis—a crisis that involves socioeconomic inequalities, curriculum content, and other issues not discussed in this article.

However, the way these courageous social entrepreneurs are choosing to live their lives points to something profound for South Korean youth and society. Whether they know it or not, these burgeoning social entrepreneurs are paving the way for South Korea’s education, and with more effective support, these young people can continue to drive positive change in the country.

Rufina Kyung Eun Park is a Master in International Education Policy candidate (expected 2015) at the Harvard Graduate School of Education. She is also a freelance writer, translator, and photographer with works published by the Korea Social Enterprise Promotion Agency and Moon Travel Guides. Previously, she worked in South Korea’s international education sector.

3  Barack Obama, “Remarks by the President to the Hispanic Chamber of Commerce on a Complete and Competitive American Education,” The White House, 10 March 2009.