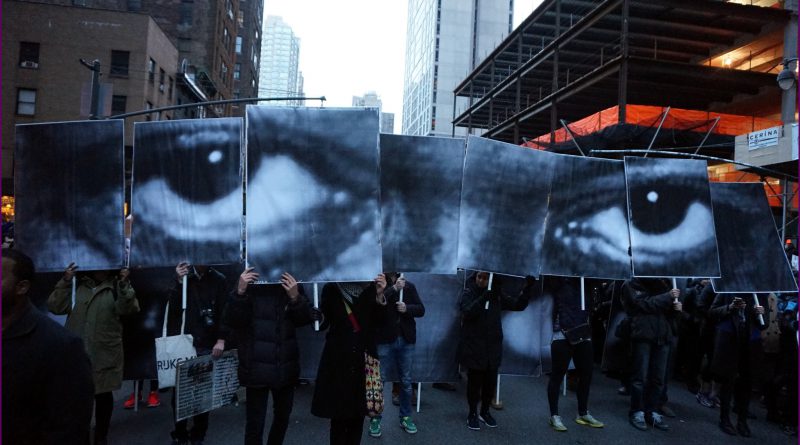 This piece is cross-posted from Pangyrus, Boston’s new journal of literature, perspective, arts, and politics.

Neither slavery nor involuntary servitude – except as a punishment for crime whereof the party shall have been duly convicted – shall exist within the United States, or any place subject to their jurisdiction.

The war at home is calling your father on his birthday, and finding out he’s back in jail. It’s the familiar resignation in your grandmother’s voice, the empty pleasantries exchanged, and the lump in your throat that refuses to melt away.

The war at home is the coat clutched tightly around your shivering frame, the itch in your eyes from the fine dust accumulating in their corners, as you sit in a building too hot in the summer and too cold in the winter. It’s the teacher barking orders over too many students, the ratty textbook and the desk shared with two others. It’s the gnawing hunger in your stomach where breakfast should be.

The war at home is anxious, darting eyes and apprehensive paces, straining to see around corners, seeking to cut through air heavy with menace. It’s the muscle memory that threads your steps through city streets, past the corners where trouble lurks. It’s the nihilistic violence of the hopper, and the caprice of the cop on his beat.

The war at home is the omnipresent knot of dread, the foreboding sense of impending calamity. It’s the trash bags that hold your possessions, awaiting your next eviction. It’s the tears that well in your eyes that first night in the homeless shelter, your shame when you return to school the next day in the same clothes. It’s the furtive consumption of your free lunch, and the awkward drape of your Salvation Army sweater. It’s the darkening of your mind when you come to realize the American Dream will not be your inheritance. It’s a lifetime of Top Ramen instead of a brief college diet.

The war at home is a secret wish for blue eyes and the unquenched thirst for acquisition. It is the rearranging of values that manages to uncover some hidden path to material wealth. It’s the admonition to be twice as good to get half the loaf – and being content with a quarter. It’s working hard, and playing by the rules, even when the rules don’t work for you anymore. It’s the belt cinched tightly at the waist, the permanently plastered smile, and adopting the Queen’s English.

The war at home is the sour taste of small successes. It coats the tongue like the hard memory of last night’s binge. It’s the intended compliments that serve as epithets: Oreo. Whitest Black Person I Know. Not Like The Others. It’s the uneasiness that congeals, double-consciousness that becomes both shield and crutch, the self-hatred turned outward at those who share your hue but refuse to play the same game.

The war at home is your quickening heartbeat when you find yourself behind a white woman on an empty street. It’s keeping your hood down, even if your ears are cold. It’s the effort to allay an unspoken suspicion. It’s whistling Vivaldi as twilight falls to signal that you are “one of the good ones.”

The war at home is being jolted out of the New Black dream. The unambiguous signs of your otherness; the cab driver that speeds past your outstretched arm; the slight edge in the police officer’s voice when she cites you for a small violation; the person at the party who asks who it was that invited the black guys. The slow drip of circumstance that serves as reminder: “Oh that’s right, we are just some niggers. I almost forgot.”

The war at home is silently waged. It is gaslighting on a societal scale. It’s the pervasive skepticism and erasure that greets black experiences. It’s plausible deniability and second-guessing. It’s the friend who assures you that you’re overreacting, the small voice inside that tells you he’s right. It’s the obsessive reliving of bad memories, the dull drumbeat in the background of your daily interactions. It’s the racist society that doesn’t see race.

The war at home is terror, fast and slow. It’s sweaty palms gripping the steering wheel at 10 and 2, on the side of a road in broad daylight. It’s the leaden feeling in your chest as the officer ambles to the driver’s side window. It’s the banal interaction gone tragically wrong. It’s adrenaline making a split-second decision to run or fight. It’s six shots in the front or eight shots in the back. It’s a broken neck and a crushed voice box. You can’t breathe. Fuck your breath.

There are no heroes in this war, only casualties. No medics are called when their bodies fall to the earth. No comfort is offered to the afflicted, and only malice to their widows and orphans. No wall will commemorate their names. When their blood cries for justice from the ground, we counsel patience. We wait for the facts. We lament the misfortune. We imply they deserved it.

It is a war waged unceasingly and unyieldingly. To end it would require a will that our nation does not possess. The war rages interminably, as shattering as the common history we cannot embrace. And yet, in our fervent dreams, in our battle hymns, we affirm the dignity of black life in a time cheapened by black death. We stretch out upon our faith in a future unseen, where the children of men will study war no more.

Sebastian Johnson is the coeditor of Unfettered Equality, a blog that offers Millennial perspectives on politics, pop culture, and current events. Its editorial mission is to cultivate and explore the growing overlap in libertarian and progressive politics as an antidote to our broken political system. Sebastian is currently a fellow at the Institute on Taxation and Economic Policy, where he specializes in state tax policy. He earned a Masters in Public Policy from the Harvard Kennedy School of Government in May 2014. His areas of policy expertise are transportation, education, economics, budget and taxation, and housing. Prior to that, Sebastian taught third grade at a charter school in Lawrence, MA. He has also worked in politics at the local, state and federal level.