Home > Blog > U.S. Naval Academy Class of 2016: The Most Accomplished (and Diverse) Class in History 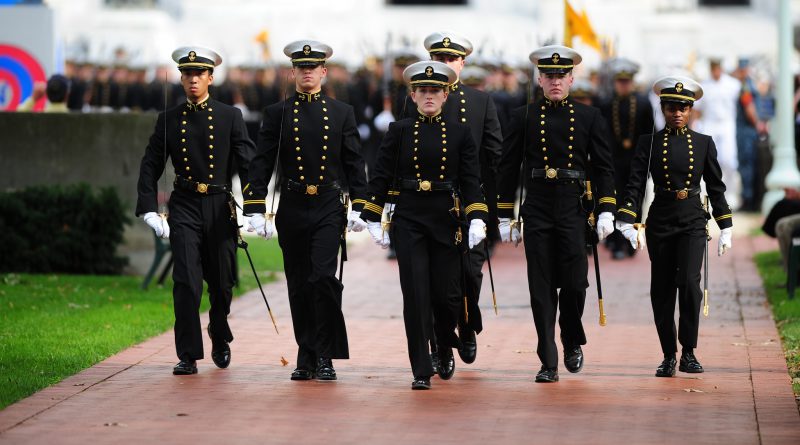 BY DAVEDE ALEXANDER and JUSTIN OSSOLA

America has been made very aware of the difficult, polarizing dynamics that can exist when the social experience of leadership and authority skews so drastically from those being served. Tinderbox situations between communities and law enforcement – such as that in Ferguson and, to a lesser extent, the current state of the NYPD – serve as wakeup calls to the underlying disparate societal patterns that can exist when organizations ignore tell-tale signs or they simply apply patchwork diversity by calling for quota increases for minority officers.  In such situations, another “diversity program” in the traditional sense is no longer necessary or effective. What is needed, instead, are operations – complete with strategy, metrics and measures – concentrated on the deliberate deconstruction of barriers to access and opportunity.  What’s the resulting net effect? A college, a community, a city better positioned to carry on a badly needed diversity discussion.

The starkness of America’s ongoing demographic shifts – particularly the growing proportion of the nation’s youth that belongs to a racial minority group — has made diversity in education an institutional imperative for colleges and universities across the country. A more diverse student body has been shown to more adequately prepare and motivate students to participate in a heterogeneous and complex society. Thus, admissions offices devote substantial time, money, and energy to expand their footprint into “diversity markets” in hopes of recruiting high-achieving minority students.

In 2008, newly appointed Chief of Naval Operations Admiral Gary Roughead tapped diversity as a top manpower priority, calling all leaders to “anticipate and embrace demographic changes of tomorrow”. Shortly after, the effort to diversify and strengthen the Navy’s officer core took center stage at the United States Naval Academy in Annapolis, Maryland. Leaders of the 170-year-old institution, responsible for almost of half of the newly commissioned officers from college each year, began asking the question: how do we attract more minorities into the Navy’s officer corps – and soon? This is where our journey began as we set out to distinguish bad habits from tradition and leverage modern implementation techniques to bring greater equality and quality to the Brigade of Midshipmen.

The U.S. Naval Academy, steeped in tradition and fiercely competitive to enter, requires a nomination from the President or Vice President of the United States, a member of Congress, or some other special nominating source. This process runs in parallel to what would be recognizable as a typical college application along with a physical fitness test and a medical screening. On top of the standards set by the board of admissions, there are alumni, Congress, active duty military commanders, and other stakeholders that have varying degrees of influence over the shape and profile of each incoming plebe (freshman) class. In summary, navigating the Naval Academy admissions process can be challenging and intimidating even for the most knowledgeable and prepared candidate, let alone someone from a disadvantaged district with few resources.

Prior to 2008, the Naval Academy, like many other institutions, tried to “get” more diversity in its student body. So, Diversity Coordinators were hired, singular campaigns targeting non-white populations were organized, and “diversity” recruiting issues were constantly addressed, yet the Naval Academy had still not diversified its candidate pool and, ultimately, enrollment to the satisfaction of leadership. Early trials served as channel markers for us as we looked to improve diversity best practices moving forward. It was our belief that the inherent challenge in recruiting high-achieving minority students reflected an overall deficiency in both communication and process management. In other words, not much was being done to attract students in general. Instead, we had been resting on our decreasing brand recognition among military families and a narrow community of wealthy, well-exposed people.  We were attracting roughly 10,000 applications annually, but with no active campaigns or robust effort to position our school among the competition, our pool was not growing. Though this was not the baseline we were asked to change, it should have been.

Shortly after the Chief of Naval Operations’ call to action in 2008, the Naval Academy formed the Strategic Outreach Office, a marketing contingent within the Office of Admissions and led by a group of young lieutenants. Senior leadership gave us the support we needed to change the internal office dialogue as well as the external outreach conversation viewing all students (including white males) as part of our diversity discussion. We crafted a multifaceted communications strategy incorporating new ways of engaging America’s youth that included early outreach to middle and high schools, showcasing the personal talents of young officers, and granting more access to the traditions and culture of the Naval Academy itself.

While direction, support, and priority were set at the level of the Superintendent, strategy and operations for increasing the number of students of color were left squarely with Lieutenants in Strategic Outreach. There were some inherent challenges here, starting with an undeniable difference in perspective between the generations that these two groups belonged to; policymakers were baby-boomers and operators were millennials. Diversity was perceived differently between these two groups, which was especially obvious during conversations of what we should do and how we should do it. Diversity seemed to be more rigidly defined by those over the age of 40. Those younger tended to have a more complex definition that seemed malleable and ever changing. Sometimes millennial leaders would hesitate to even apply a framework around diversity so as to not limit its basic definition to the way it appears in a dictionary. The very argument of what diversity means and how you go about achieving it in a fair and dignified way left everyone at the table feeling less satisfied and downright uncomfortable, however, there were a few of us that decided it was time to change the conversation and framework altogether.

As we moved forward with our strategy, the applicant pool not only expanded in number but improved in its overall academic, athletic and leadership profile.  And, yes, we were “getting” more diversity as well.  We yielded more quality leads, increased applications by more than 40 percent in the first year of our department’s formation, and reached a record number of applications in 2010.  Our soaring admissions numbers captured national attention, and our footprint expanded across America with the development of our Science, Technology, Engineering and Math (STEM) Summer Program.  The diversity discussion was being positively fueled by sustained increases in competitive racial and ethnic minority applications – including a 56 percent increase in minority applications in our first year.   In Navy terms, the rising tide lifted all boats.

1. The message should be geographically focused – not racially focused. We used the country’s rich diversity to our advantage and focused our efforts on areas we were not reaching. This approach allowed us to be naturally inclusive while shifting internal staff conversations from a quagmire of social issues to specific operational ones. In other words, we used operational language that we could all understand.

2. The message should reflect the institution’s ideals. For example, our school places a premium on leadership development and is proud of graduates for that reason, so we showcased that. Students, regardless of race, gender, or ethnic background, tend to coalesce around shared, lofty ideals.

3. Communicate with practical purpose. In a world of 140 character limits, abbreviated communication, and short-term commitments, we did not attempt to get leads to commit to four years of tuition, books, and lodging. Our communication highlighted a specific interest, story, or program to drive that lead to the next appropriate step in candidate grooming.

4. Use early outreach programs as a branding mechanism. Ultimately, the candidate pool will expand and include faithful followers because of these interactions. These new communities will continue to exist long after the candidate has attended the program, thanks to social networks. It is advantageous to establish a social networking platform for this behavior as a way to keep tabs on the growth of those communities.

When the Chief of Naval Operations declared diversity a top priority, there was no litany of guidelines or general orders as to how this would be achieved. It was left to commanders in charge of personnel – which ultimately fell to us. Luckily, the Navy Lieutenant is the backbone of the officer corps. A Lieutenant is junior enough to understand his or her Sailors and lead with authenticity whilst carrying the authority and forehandedness to earn the Captain’s ear from time to time. Going against the grain of the traditional command and control leadership style in the military, the politics of diversity took on a bottom up approach. The well-positioned millennial Lieutenant embraced it, pieced together existing and new systems to reframe it, and then executed every aspect of its strategy.

In 2012, four years after Strategic Outreach opened its doors; the Naval Academy attracted 20,601 applications – more than double the mark set in 2008. The incoming class boasted the most academically accomplished students in history as well as the most diverse. But did the cost outweigh the benefit? Some vociferously oppose any sort of diversity integration in our military, claiming it weakens our national defense. They fear that lowering standards to let in “less qualified” minorities fuels a more pervasive dilemma of populating our armed forces with less committed and competent officers. However, by accepting and believing that “high standards” and “diversity” are not mutually exclusive terms and understanding that expanding our presence and improving ease of access will yield deep pools of candidates; opponents can rest knowing that standards of competition are not and do not have to be lowered. We will soon see legions of officers who have varied backgrounds leading at the highest levels of authority in the Navy and Marine Corps.

Davede Alexander is a graduate of the U.S. Naval Academy where he earned a Bachelor of Science degree in political science, while playing football for the Midshipmen. He served two tours as a Surface Warfare Officer from 2001 to 2005, supporting strike operations and maritime security operations in Iraq. After completing his military service, Davede was appointed as the Academy’s first Director of Strategic Outreach. The strategic outreach team and the programs he implemented earned him the 2010 Black Engineer of the Year Award for Diversity Leadership in Government. In 2012, Davede created his own firm, Innovo Strategic Solutions, LLC, providing support to organizations dedicated to personal achievement and social advancement. He is currently a member of the Board of Trustees at Bridgewater State University.

Justin Ossola is a Master of Public Administration candidate at Harvard’s Kennedy School of Government. Previously, he attended the United States Naval Academy where he studied Quantitative Economics. Upon receiving his commission, he was assigned to the USS Bonhomme Richard (LHD-6) as a Surface Warfare Officer deploying twice overseas in support of Operation Enduring Freedom. Justin spent his final tour back in Annapolis working as Regional Director of Admissions for the U.S. Naval Academy. He resigned his commission in 2012 and now lives with his wife and son in Annapolis, MD.