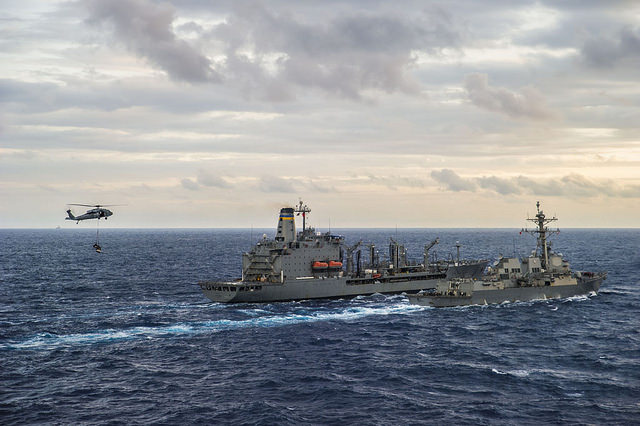 While strategic ambiguity has been a significant instrument of US defense strategy in the Asia-Pacific, emerging regional threats and power imbalances have made this strategy increasingly difficult to justify. Strategic ambiguity insulates us from hard commitments in regional conflicts not directly related to our interests and exacerbates China’s uncertainty about our motivations. Our regional partners are worried about China’s naval expansion and territorial ambitions and are increasingly unconvinced that the United States has a clear strategy and the willpower to manage new security challenges.

The dispute in the South China Sea, which involves a complex set of issues related to geopolitics, sovereignty, history, and international law, cannot be resolved through United States strategic ambiguity alone. Yet, our defense policy can move the issue forward by helping to de-escalate the situation. To do so will require a level of strategic clarity. This means that the United States must be clear and consistent in its intent in the sea and establish strictly defensive arrangements with its allies. Moreover, since the US has declared the South China Sea a “maritime commons,” it should be prepared to outline what it will do if that concept is violated. Indeed, strategic clarity can peel back layers of uncertainty in the conflict and may thereby facilitate a new paradigm of power relations in the South China Sea.

Strategic ambiguity naturally positions the United States as an offshore balancer, where the navy can signal intent to intervene in potentially destabilizing confrontations, but can shy from an actual decision to engage. During the 1994 Taiwan Straits crisis, in the midst of growing tension between China and Taiwan, a US aircraft carrier was deployed to the strait to signal to China that the United States would not tolerate unchecked aggression against Taiwan. China backed down, and the crisis was averted. Relative to the 1994 crisis, however, the South China Sea dispute is not so black and white. A haphazard network of regional alliances, overlapping sovereignty claims, and regional economic competition diminish the effectiveness of strategic ambiguity.

In 2010, at the ASEAN Regional Forum, then-Secretary of State Hilary Clinton’s declaration of the South China Sea as a “maritime commons” implied a rebuke of any claimant’s desire to control that area. Yet, she did not articulate further what the United States was prepared to do in the event this concept was violated. Clinton was also careful to acknowledge that the United States had no stake in sovereignty disputes and was solely interested in maintaining the freedom of the seas. This, too, left lingering questions over what the United States would do if sovereignty conflicts interfered with its ability to preserve the freedom of the seas.

The statement offended the Chinese, who viewed the South China Sea as much its territory as the islands it claimed, while the Southeast Asian claimants inferred the US declaration—subtly critical of China—to mean it had entered the territorial struggle on their side. The parties wrongly misinterpreted our intent (freedom of the seas, not sovereignty) but the moment illustrated our default to strategic ambiguity. Instead of addressing the reckless actions of the disputants that compromised stability, and thus our ability to preserve the freedom of the seas, we only tangentially connected escalating tensions with this priority.

In the years since 2010, rather than achieve stability in the South China Sea, China and its neighbors have engaged in more violent face-offs. In 2014 alone, the Philippines and China prepared for a military confrontation over Pagasa Island, the Philippines seized Chinese fishing boats and imprisoned Chinese fishermen, and Vietnamese civilians looted Chinese factories in protest of a Chinese oil rig built off the coast of Vietnam.

In a region already fraught with uncertainty over states’ motivations, the United States’ lack of commitment to the freedom of the seas and its unwillingness to define its position vis-à-vis China and the rest of Southeast Asia has exacerbated a precarious issue.

To prevent escalation of the dispute, the United States must first make clear to regional partners its intent and role in the South China Sea dispute. To do so, we must be clear that our priority is to preserve stability and the freedom of the sea-lanes of communication critical to global trade, not to engage on matters of sovereignty. Sovereignty contests, however, often interfere with our efforts to maintain the freedom of the seas and so we must be willing to defend the freedom of the seas, even as that conflicts with sovereignty claims. In that respect, we must be willing to act consistently when our priorities are compromised by irresponsible actions undertaken by any disputant, and confront any state that attempts to obstruct trade or military vessels seeking “innocent passage” through the South China Sea. Third, we must communicate to Vietnam, the Philippines, and Malaysia, that our presence is strictly defensive, and that we will not condone unilateral actions on the sea that would provoke a Chinese response. This way, we would continue to balance the variable interests of all stakeholders and eschew any perceived favoritism propagated by China.

To be sure, a policy of deliberate ambiguity has the advantage of insulating the United States from hard commitments to undesirable situations. But in the multiparty, high-stakes contest of the South China Sea, ambiguity serves us less than does clarity. The recent thawing of Sino-Japan relations over the East China Sea illustrates this point. Since 2012, Japan and China have been engaged in a miniature cold war over the status of the disputed Senkaku/Diaoyu islands. China’s unilateral imposition of an Air Defense Identification Zone (ADIZ), which covered the disputed sea and islands, elicited criticism from the United States. The United States, however, acted upon those criticisms, sending B-52 bombers directly into the contested airspace. Furthermore, in April 2014, President Obama explicitly articulated a US commitment to the defense of the Senkaku/Diaoyu islands as part of the US-Japan Mutual Security Treaty. The combined effect was that, for all the media rhetoric tossed between the two sides, China did not directly engage with the United States, defaulting instead to a pattern of complaints over US infringement upon its bilateral affairs.

On the China-Japan dispute over the Senkakus, Professor Thomas Berger of Boston University has noted: “The overwhelming majority of Japanese…have little desire for an actual conflict with Beijing. Instead, what they hope is that through a policy of strength, they can get China to moderate its policies toward Japan.” Though the South China Sea conflict has a greater number of competing stakeholders and interests, the same foreign policy approach should be conducted.

A “policy of strength” is a policy of strategic clarity. Despite its growth, China remains constantly vulnerable. Its leaders face a transforming party, internal dissent, and peripheral territorial concerns. For its aggressive rhetoric, China is not yet positioned to assert its interests without directly coming into conflict with other equally formidable actors like the US. A policy of strategic ambiguity will only encourage China and the Southeast Asian claimants to continue engaging in a game of cat-and-mouse, with potentially disastrous consequences.

Derek Pham is a Master in Public Policy candidate at the Harvard Kennedy School and serves on the Southeast Asia Caucus’s executive committee. Prior to graduate school, Derek worked as a teacher in Houston and Boston. He received his Bachelor of Science in Foreign Service from Georgetown University’s School of Foreign Service.