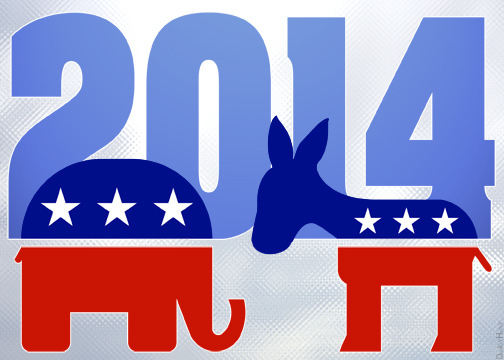 Will history judge the 2014 midterm elections a Congressional wave year? The election certainly felt like a repeat of 2006 and 2010. After all, in all three elections, the party of an unpopular sitting President suffered significant losses in both the House of Representatives and the Senate with one chamber of Congress switching party control. In the wee hours of election night, Ross Douthat posted in the Times that, “it’s a wave, it’s a thumping, it’s whatever metaphor you favor to describe a major repudiation of the president and his party.” Ron Brownstein at the National Journal dubbed it a Halloween friendly: “Shellacking, the Sequel.” Déjà vu, indeed.

Granted, there’s no question the Republican Party out performed most polling predictions in terms of total seats won as well as margin of victory and, to another extent, margin of defeat in races like Virginia’s Senate seat. And, the GOP will have its largest House majority since World War II alongside its largest Senate majority since the last two years of Bill Clinton’s presidency. But beyond those numbers, it would be foolish to draw a broader narrative arc for two main reasons: Republicans did not perform particularly well in liberal areas and voters resoundingly endorsed liberal policy ideas in statewide referendums.

The day after the election, Ryan Lizza at the New Yorker compared how the Republican Senate candidates fared this midterm against the states President Obama carried in the 2012 Presidential race. In the fifteen states holding Senate elections that President Obama won in 2012, Republicans won just three: Colorado, Iowa, and Maine.  Maine is hardly noteworthy here considering centrist Senator Susan Collins won re-election to her fourth-term in office.

None of the other races – especially Oregon, Minnesota, and even New Hampshire – were competitive, except in Virginia where Ed Gillespie nearly pulled off an improbable upset thanks in part to voter turnout hovering below 37 percent. That number was on par with a national turnout rate of 36.3 percent, hardly considered healthy for one of the world’s most vibrant democracies.  Even in those conditions, Senate Republicans failed to pull off a major Congressional upset, a key characteristic of the 1980, 1994, 2006, and 2010 wave elections, according to the National Journal’s Charlie Cook.

Rather than a wave or a thumping, I tend to agree with Lizza that instead, this election outcome is symptomatic of the geographic polarization that has accelerated since 2008. In particular, whereas Democratic candidates won solidly in the twelve races identified above, other candidates that might have previously run competitive races in southern, firmly conservative states like Kentucky, Georgia, and Arkansas were left trounced and humbled.

Donkeys are on the verge of extinction in an increasingly hospitable environment for the GOP elephant.

The Pew Research Center best quantified this trend in its well publicized June 2014 poll, which highlighted, among other meaningful findings, increasing “ideological silos” for both liberals and conservatives in terms of places to live, friends to associate with, and people to marry. Pew finds few reasons to suggest a reversal of this political polarization in the years ahead.

The results of statewide ballot initiatives suggest another important note of caution to the newly elected Republicans: the 2014 races were not an ideological endorsement of traditional conservative values. In fact, one of the great ironies of the election was the number of traditionally left-leaning policies that states adopted via referendum while still electing right-leaning candidates. On the same night that Republicans impressively took control of 67 state legislative chambers and 31 governor’s mansions, voters in Alaska, Arkansas, Nebraska, and South Dakota chose to raise their minimum wage, mostly by overwhelming margins; Alaska, Oregon, and Washington, DC legalized recreational marijuana; Colorado and North Dakota defeated fetal-personhood amendments; and Washington State approved a ballot measure to expand background checks for all private gun sales.

What to make of this cognitive dissonance in voting?  On one hand, exit polling clearly revealed that voters remain deeply pessimistic about the state of the economy, yet they trust neither party to right the ship.  On the other hand, some are optimistic that divided government will induce compromise on thorny issues.

I wouldn’t count on it.

The mixed message signaling from voters – perhaps a protest against Washington more than anything – is likely to perpetuate Congress’s recent paralysis. Without a clear governing narrative for either party, the electorate has likely chosen a structure of government too ideologically separated to accomplish anything substantive. The fact that Republican Senators are turning Loretta Lynch’s nomination for Attorney General into a proxy war about the President’s immigration agenda underscores these challenges.

Over the next two years, look instead for President Obama, deeply conscious of his legacy, to be even more willing to take unilateral executive action wherever possible on issues like immigration, Iran’s nuclear program, and Guantanamo Bay. And look for more polarization across the 32 states that will feature one-party control of state legislative action come January. In the end, this election may prove a harbinger of deeper fissures yet to come.

Mitchell Alva is a Master in Public Policy candidate at the Harvard Kennedy School.  Prior to graduate school, Mitchell spent three years in the State Department’s Bureau of Democracy, Human Rights, and Labor where he coordinated worker rights programming across the Middle East and North Africa, South Asia, and Eastern Europe.  Mitchell received his Bachelor of Science degree from Cornell University’s School of Industrial and Labor Relations in 2010.