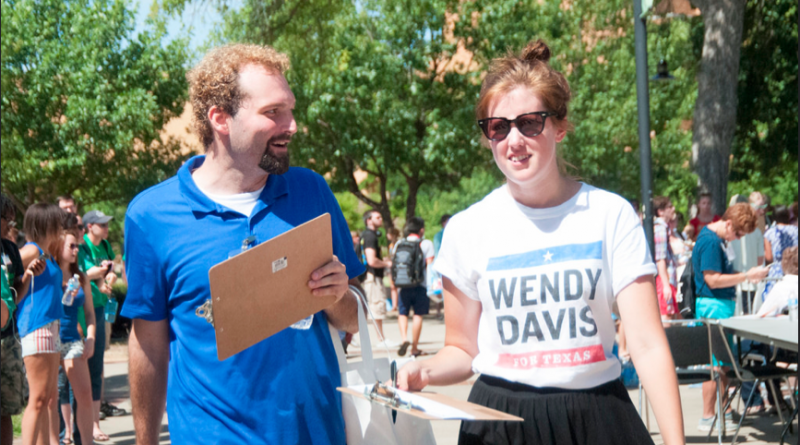 It has been a love-fest on the campaign trail this year. During weekends in October and the days leading up to Election Day, I’ve been a volunteer canvasser knocking on doors for Mike Michaud’s run for governor of Maine, US Senator Jeanne Shaheen’s reelection campaign in New Hampshire, and Wendy Davis’s run for governor of Texas. Though all of these elections are contested, and several are tossups, I’ve been invited by potential voters to eat their cookies, engage in romantic liaisons, and see pictures of their grandchildren (not all at one house). While I had to turn down those offers, the voters I’ve seen have been even friendlier than when I campaigned in 2008, 2010, and 2012.

This friendliness isn’t a result of my skill as a canvasser. Campaigns are progressively improving how they target voters, prioritizing those who are known – or are likely to be – supporters. While canvassing this fall, I was in democratic-majority neighborhoods. I saw a grand total of one yard sign for a Republican opponent, and I spoke with only one person who identified herself as a non-supporter.

Could this improved targeting have a pernicious effect on the way campaigns are conducted? If campaigns can talk directly to supporters with greater accuracy, will they ever need to engage on bipartisan issues that don’t excite their base in the way more contentious topics do?

This campaign cycle is my third experience with a turnout-focused strategy based on the behavioral science models pioneered by the Obama campaign in 2008. The Obama campaign used improved technology to analyze voter databases to better target online outreach for donations and petition signatures. The campaign also relied on behavioral research to discover the issues most important to voters who supported then-Senator Obama.

The campaigns I’ve volunteered with the last several election cycles have utilized these tactics. The campaigns shun yard signs, don’t knock on doors indiscriminately, and send volunteers into a house knowing more about a residents donation, registration, and voting history than perhaps the resident herself. Many of these insights are based on research done here at Harvard, by Kennedy School professor Todd Rogers, and are captured by former Institute of Politics Fellow, Sasha Issenberg, in his book, The Victory Lab.  But there’s an effect on policy if campaigns count on existing Democratic-leaning voters instead of luring independent or Republican voters to their candidate. There is growing evidence that asking voters to construct a plan for going to the polls and telling them turnout is going to be high makes them more likely to vote – raising Democratic votes cast in any given campaign. This means there’s less incentive to reach out to independents.

Campaigns have grown more confident in these turnout techniques, and a number of Democratic victories in the last four years have been attributed to turnout differences among core voters – Michael Bennet in 2010, and even Obama’s 2012 electoral success in swing states. This has led 2014 campaigns such as Colorado Senator Mark Udall’s (which emphasizes reproductive issues) to double down on targeting existing Democratic-leaning voters with turnout efforts. Focusing on like-minded potential voters may heighten the political polarization among American voters. But what if there are substantive issues that appeal to both sides, but don’t engage a party’s base?

Medicaid and the Uninsured

Maine and Texas – two states where I canvassed – are similar in having a disproportionate portion of uninsured residents compared to their neighbor states. Their governors (and Texas’s Republican candidate for governor) share an opposition to the Affordable Care Act (ACA) and the law’s provisions to expand health insurance under Medicaid to more low-income adults. This opposition to Medicaid expansion persists despite the fact that the federal government would pay 100 percent of the expansion’s cost through 2016 and more than 90 percent of its cost through 2022. Maine governor, Paul LePage, vetoed bills to expand Medicaid three times, and the Texas Legislature never came close to passing Medicaid expansion. This leaves tens of thousands in Maine and millions in Texas without health insurance and keeps poor residents financially and physically vulnerable.

The incremental nature of the ACA could be at the heart of its largest political and moral failure. Medicaid expansion was drafted in a sensible way for policy. It granted states flexibility to set up their own programs, built on the existing Medicaid program, and bolstered the support of stakeholders such as insurers and hospitals. However, the things that made sense for policy and for stakeholders also make it difficult to present the policy to voters in targeted campaigns. The use of complicated formulas to determine eligibility, the differences between states in coverage expansion methods, and the lack of partisan positioning make topics like Medicaid difficult to present at the doorstops I and other canvassers visit.

I want the national conscience to be galvanized by the failure of governors to expand Medicaid. But I’m not typical of the people Democrats are trying to get to the polls. Given the move toward voter turnout strategies in campaigns, we should expect to see policy that is more tangible and appealing to base voters. For example, candidates may emphasize their support of expanding the more familiar Social Security program over their support for an expanded Medicaid program. Simpler issues that appeal to the base will continue to get more policy and campaign emphasis. It remains to be seen whether this will be better or worse for the Americans that these campaigns want to move to the polls.

Taylor Woods is a second year Master of Public Policy student at the Harvard Kennedy School of Government. Taylor graduated from Washington and Lee University in 2008 with degrees in American History and Politics. After college, Taylor worked for Chairman Rockefeller on the Senate Committee on Commerce, Science, and Transportation. Before the fall of 2014, Taylor had volunteered in campaigns in Virginia Beach, VA; Jenkinstown, PA; Camden, NJ; and Fargo, ND.