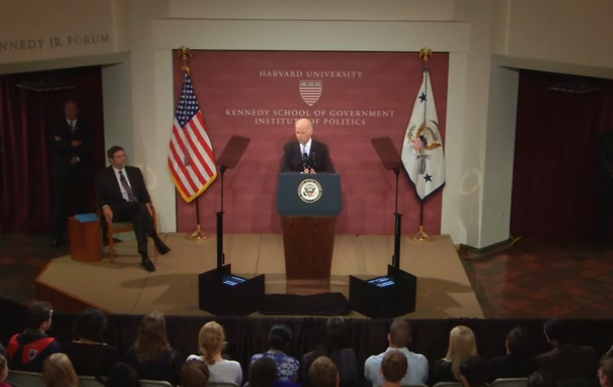 On Thursday, October 2, 2014, Vice President Biden addressed an audience at the Harvard Kennedy School of Government on a range of foreign policy topics. As a special feature, the Kennedy School Review has collected student perspectives on some of the policy issues the vice president covered in his remarks.
———————–

The Islamic State of Iraq and the Levant (ISIL)

During his HKS address on American foreign policy, Vice President Joe Biden highlighted the US’s current efforts to “degrade and destroy” one of the fastest growing and most brutal terrorist organizations in the world today: ISIL. In doing so, the vice president underscored the importance of working with a coalition of Arab states to stem the flow of foreign fighters and funding to the group. He also emphasized the responsibility of countries like Iraq and Syria to take responsibility and fight rather than relying on the US to do the dirty ground work. Biden critically alluded to lessons learned from previous interventions in the region, and, in line with the president’s recent statements at the UN, reassured the American people that the administration recognizes that “unsustainable deployment” of troops to the region is ineffective as a sole strategy.

While this overall message echoes much of the discourse among foreign policy experts, the vice president did present an air of overconfidence in stating “we know how to deal with [this]” given the US experience post 9-11 regarding how to use power wisely.

Rather, the current unstable state of both Afghanistan and Iraq reveal the opposite – that we don’t really know how to eliminate these networks (though we are good at incapacitating them for short periods of time), nor do we know how to bring stability to the region. While no one in this country wants to send US ground troops, the fact is that trained fighters will be needed to combat ISIL, and the local forces do not yet have the capacity. While the current strategy of providing some air support and arming and training opposition fighters represents a safe start that may slow the recently rapid rise of the group, the Obama Administration will need to form a long-term strategy that can not just degrade ISIL, but also destroy it.

In recent remarks at the United Nations, President Obama stated that Ebola “is a growing threat to regional and global security”— a warning further highlighted by Vice President Biden at Harvard last Thursday. The necessity of action compelled the White House to deploy three to four thousand American military forces including a headquarters from the storied 101st Airborne Division to West Africa. This was over double the ground commitments sent to Iraq to battle ISIS.

There is no doubt that the U.S. military remains one of the only organizations with the capacity to respond, but it remains a dangerous and confusing trend during an era of military downsizing. We ask our military to handle increasing security challenges worldwide, and place them in the role of responding to health and humanitarian crises globally. Washington has talked about building civilian capacity for years, and now would be a good time to start. What we need is a “surge” executed by the Center for Disease Control and not the 101st Airborne.

William Denn is a career Army Officer and Master in Public Policy candidate at the John F. Kennedy School of Government at Harvard University. Prior to attending the Kennedy School, he conducted counterinsurgency and intelligence operations in both Iraq and Afghanistan. The views in this piece are his own.

Relations with South and Central America

Vice President Biden spoke about a new framework for relations with Mexico and Latin America. He called on students to think differently about the region. In his words: “we really have changed our view, that South and Central America is no longer our back yard; it is our front yard” and he is right. Latin America is no longer the ground of a fight between capitalism and socialism. That world is over, but past resentments are still fresh. Consider the involvement of the CIA in the contras scandal or the overthrowing of democratic regimes in Latin America. The region and its people to some degree still experience distrust of their big neighbor north of the Rio Bravo.

However, the opportunities lying ahead are promising for us all.

Vice President Biden highlighted that North America is the epicenter of energy in the world today. Two thirds of the growth of energy supply in the world will come from Mexico, Canada, and the US, he said. Today, the U.S. exports more to Mexico than to Japan, Germany and the UK combined. Likewise, the U.S. is Mexico’s biggest trading partner. This changing world is an exciting ground for Mexicans and Americans alike. If we want to make the most of it, we have to build trust, as the vice president said. I agree with Vice President Biden and believe it applies to the Kennedy School and beyond.

Miguel Guevara was born and raised in Cuernavaca, Mexico. He holds a Bachelor of Science in Telecommunications Engineering from the National University of Mexico. Before coming to the Kennedy School, Miguel worked in the Mexican Federal Government as an advisor to the Chairman of the Telecommunications Regulator.

Special thanks to the Harvard Institute of Politics for providing the video of Vice President Biden’s address.