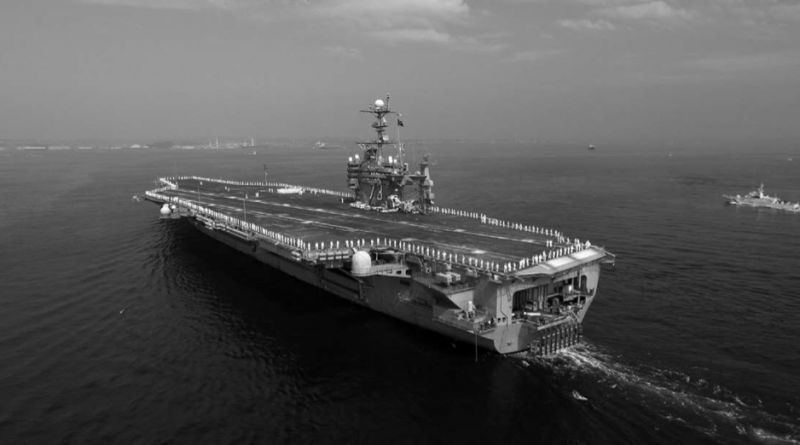 A New U.S. Defense Strategy for the 21st Century

BY GREGORY WHITTEN AND ERUM JILANI

THE UNITED STATES HAS EMBARKED on a new defense strategy: the rebalance to the Asia-Pacific region. Moving forward, the United States will play a deeper and more enduring role in promoting security and prosperity in the region. The rebalance to Asia, involving multiple actors within the U.S. government, is designed to sustain our leadership in the region and protect our diplomatic, military, economic, and strategic interests.

During the past six decades of U.S. military presence in the Asia-Pacific, U.S. allies and partners have ushered in an unprecedented era of security and prosperity. Asia will play an even greater role in these areas in the 21st century. The region is home to the world’s largest populations and some of its biggest militaries and fastest-growing economies, including India, China, and Indonesia.

East or other priority areas. Indeed, the administration has moved away the label of “pivot” to that of “rebalance” specifically to make clear that the United States is not abandoning its commitments in other parts of the world.

Instead, the administration is rebalancing U.S. interests and resources toward a region that is increasingly important for our prosperity and security. Asia encompasses one-third of global trade, including $1.5 trillion annually in trade with the United States.1 Recognizing these realities, the Department of Defense (DoD) is pursuing two major efforts to protect and advance U.S. interests in the Asia-Pacific region: first, strengthening alliances and partnerships, and, second, investing in new capabilities.2

As we move away from a decade of ground wars to drastically different threats in the Asia-Pacific region, DoD will need to examine how it approaches the acquisition and procurement of cutting-edge technologies. We see new challenges in the Asia-Pacific on a daily basis in cyberspace, maritime security, and proliferation. The Department has moved to focus on the air, sea, and cyber domains, shifting away from large multibillion-dollar land-based engineering programs. The Department will still maintain large engineering projects, but the coming years will see a significant shift into enhancing resources to meet 21st century challenges.

The United States and its allies in the Asia-Pacific face a vast array of threats that require us to build a highly educated, mobile, and flexible force with dominance in air and sea.3 A higher proportion of U.S. military assets will be allocated to the Pacific in coming years. For instance, Secretary of Defense Leon Panetta announced in 2012 that 60 percent of the U.S. Navy will be home-ported in the Pacific by 2020—a significant shift from the current fleet structure, which is focused on supporting conflicts in the Middle East.4

A foundational element of DoD’s rebalance to the Asia-Pacific is an increasing network of alliances and partnerships in the region. The Department is striving to modernize and deepen treaty alliances to ensure that they remain relevant to future challenges, while also balancing the fiscal restraints the United States is currently facing. DoD’s three focus areas are: security cooperation, building capacity in Southeast Asia, and strengthening multilateral institutions.

With security alliances, the Department is working to increase security cooperation. In Northeast Asia, DoD is modernizing long-standing alliances with Japan and South Korea. In Japan, this includes realigning the Marine Corps’ presence in Okinawa to ensure sustainability over the long term, as well as revising the defense guidelines that underpin our cooperation.

In South Korea, DoD just completed a cost-sharing agreement with the government to ensure that we have the resources necessary for the combined defense of the Korean peninsula.5 We have increased our interoperability with Australia while fighting with their military in Iraq and Afghanistan. The Department will also rotate up to 2,500 Marines and aircraft to Australia’s Northern Territory, furthering our presence in the region.6

These efforts build upon the United States’ commitments to the region since World War II. While building capacity among our allies, we have also strived to ensure that our investments promote U.S. interests, which include managing an unstable North Korea and strengthening multilateral institutions such as the Seoul Defense Dialogue.

DoD is building capacity in Southeast Asia through increased humanitarian assistance and disaster relief (HADR) and via investments in maritime security cooperation.

Led by the U.S. Agency for International Development, the U.S. government underscored its commitment to the region with the recent mobilization of forces and assistance during Typhoon Haiyan in 2013. As part of the U.S. effort, DoD transported more than 1,700 tons of aid, assisted with the transfer of nearly 18,000 people out of affected areas, and deployed 3,700 personnel as well as several ships and aircraft.7

With a rise in climate change–induced catastrophes in Southeast Asia, it is critical that the United States continues to provide HADR resources to allies and partners in the region. DoD is expanding cooperation on this front with the Philippines, Vietnam, and Indonesia. Building this capacity will shorten the amount of time that lapses between disasters and responses, potentially saving thousands of lives.

Maritime security cooperation is another critical component of DoD’s strategy, particularly given the competing territorial claims in the South and East China Seas. Additionally, one-third of the world’s transit passes through the South China Sea, making it one of the most important shipping lanes in the region. The South China Sea’s resources, including fisheries and possible crude oil and natural gas, make it one of the most contested bodies of water in the world. Increased Chinese patrols in the South China Sea have raised regional fears that Beijing may develop the same type of air defense zone that exists around the islands claimed by Japan in the East China Sea.8 These territorial claims have led to tension in the region that must be addressed diplomatically and through regional institutions such as the Association of South East Asian Nations (ASEAN). Both Secretary of State John Kerry and Secretary of Defense Chuck Hagel have worked to negotiate a peaceful settlement calling for greater transparency on sovereignty claims.

The United States is committed to regional peace and stability, including establishing norms and regional institutions to prevent acts that could lead to conflict. The Obama administration is working through regional institutions to promote U.S. values and interests. One of Secretary Hagel’s strategic priorities is to make our defense engagements around the world more collaborative.

In support of this goal, DoD has increased multilateral work through institutions such as ASEAN and trilateral cooperation between partners (for instance, the United States, Australia, and Japan). Hagel will also host the first ASEAN Defense Ministers Meeting in April 2014 in Hawaii. Ten defense ministers from the region will gather for three days to discuss future avenues for cooperation. This type of regional forum facilitates greater understanding of shared challenges and efforts to build joint capabilities.

Another arena in which joint capabilities are being developed is through multilateral exercises. The United States hosts the Rim of the Pacific (RIMPAC) exercise, which gathers over twenty nations for a maritime warfare exercise to build interoperability and military-to-military relationships. This year, China will participate for the first time in the RIMPAC exercise.9 China’s participation moves us closer to the fundamental goal of building a U.S.-China military-to-military relationship that is stable and transparent. Military exercises also help build the relationships and cooperation that are integral during times of conflict.

As DoD moves forward in the rebalance to the Asia-Pacific, threats will evolve, making it crucial that the Department equips the force with cutting-edge technologies in the space, cyber, and maritime domains.10 Bringing these types of capabilities to the forefront of the acquisition process will inherently change how we approach defense acquisition in the 21st century.

Defense acquisition is evolving and will continue to do so as we move farther along in the rebalance. This change can be seen in the shift away from counterinsurgency technologies over the last five years in favor of platforms and weapons systems focused on air and sea capabilities. At the 2013 Shangri-La Dialogue, an annual Asia-Pacific’s Defense Ministers meeting, Hagel stated that DoD will “prioritize deployments of [its] most advanced platforms to the Pacific, including the F-22 Raptor [jet fighter] and F-35 Joint Strike Fighter deployments to Japan, and a fourth Virginia-class fast attack submarine forward [deployed] to Guam.”13

The cyber threat is one of the greatest challenges for the rebalance. Secretary Hagel has noted that cyber threats pose a “quiet, stealthy, insidious”14 danger to the United States and other nations and has called for “rules of the road”15 to guide behavior and avoid conflict on global computer networks. His comments, along with the Department’s investment in more cutting-edge technologies, demonstrate how DoD is looking to invest in innovative technologies for the 21st century.

As DoD works toward investing in new capabilities, it will also have to look at how to reform the bureaucracy and budgets of the past. The Department has made significant investments in cyber, but still lags behind some of the technological innovations seen in the private sector. The initial steps to reform the Federal Acquisition Regulation and requirements system will open the door to conversations with untraditional defense industry partners, such as Silicon Valley companies. However, it will take significant work to equip our forces with the most current technologies to combat the threats they will face in the Asia-Pacific.

Efforts to develop and invest in new capabilities in the Asia-Pacific region will also involve Congress, which must approve the Defense Budget. The National Defense Authorization Act (NDAA) of 2014 clearly defines Congress’s support for the rebalance. For instance, Congress has approved updates to the capabilities of the United States Pacific Command (PACOM), such as facility improvement to bring new V-22 Osprey squadrons to Marine Corps Base Kaneohe and updates to the Pearl Harbor Navy Shipyard to allow maintenance to continue on Nuclear Submarine fleets.16 The NDAA also allows for updates to Fort Shafter in Hawaii so that the Army may move forward with construction of a new PACOM Control Facility.17 Congress has also approved investments of $494.6 million to update our force structure in Guam and $85.7 million to build a Marine Corps Hanger and Andersen Air Force Base to strengthen the Marines’ forward deployment presence in the Asia-Pacific.18

Throughout the coming year, Secretary Hagel will continue to travel to the Asia-Pacific region to strengthen diplomatic ties, specifically through the ASEAN Defense Ministers Forum and the annual Shangri-La Dialogue. As we move forward and set the stage for engagements in the Asia-Pacific, a solid foundation has been built in modernizing security cooperation with traditional allies while building capacity and enhancing our presence in Southeast Asia. We are fully engaged in the region’s multilateral institutions and have an active role in empowering institutions such as ASEAN to ensure future conflicts are settled in accordance with international law.

A more flexible defense acquisition system will be developed through 5000.02, allowing the Department to develop the capabilities needed to sustain our dominance in the air and sea. DoD has aligned itself to develop a more flexible and adaptable force to face 21st century threats across the globe through the Asia-Pacific rebalance. The rebalance to the Asia-Pacific will be an ongoing effort in the coming years, but DoD has developed a strong foundation from which to begin implementing the rebalance strategy. We will continue to invest time and energy to sustain American leadership and interests in one of the most important strategic foreign policy shifts of our time.

Erum R. Jilani is a Defense Fellow and Regional Policy Advisor in the Office of the Secretary of Defense.

Gregory H. Whitten is Director of Strategy and Plans for the Department of Defense Health Management Systems in the Office of the Secretary of Defense.

The views expressed in this article are those of the authors and do not reflect the official policy or position of the Department of Defense or the U.S. Government.