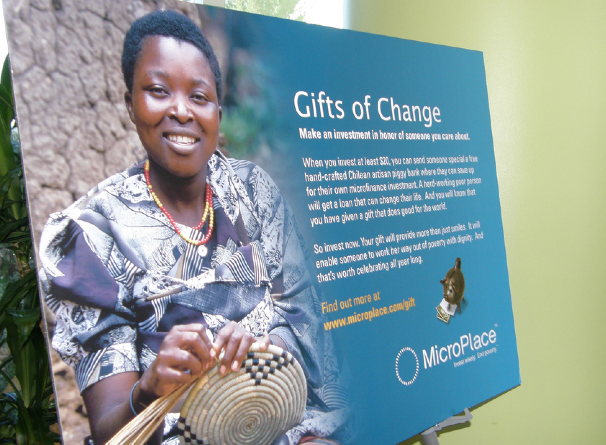 Impact investing has become a buzz word in social enterprise circles but, even today, opportunities to invest are hardly accessible to the average American. Barriers include protective federal regulations as well as the inability to reach scale.

On January 14, eBay ended its brief flirtation with impact investing.

The internet giant had acquired a small startup called MicroPlace in 2006, thus becoming a major player in the emerging market of small-scale lending.

With the online auctioneer’s global reach, company executives believed they could close the poverty gap by enabling the average American to lend small amounts ($50 to $100) to enterprises in the developing world at a 1 to 4 percent return.

“Think about the impact we could collectively make if all individual investors invested just a small portion of their investment portfolio in impact investments,” Ashwini Narayanan, general manager of MicroPlace, told Forbes in 2011. “[Before MicroPlace], there was no easy way for individuals to make investments that enabled capital to flow to microfinance institutions. Only high net worth individuals and large institutions were able to make such investments.”

In a statement posted on the MicroPlace Web site, the California-based social enterprise wrote, “We’ve made the difficult decision to stop offering new sales of investments through MicroPlace …While proud of our results, they haven’t scaled to the widespread social impact we aspire to achieve.”

Now some observers are questioning whether impact investing for the average American is a functional model.

“We think MicroPlace’s departure leaves a hole in investing for the individual,” said Justin Conway, vice president for Investment Partnerships with Calvert Foundation, a pioneer in impact investing, which partnered with MicroPlace when it was founded. “It’s a loss for investors looking to invest online and at lower dollar amounts.”

Despite MicroPlace’s decision to cease operations, Conway insists there is untapped demand for impact investing among the retail investor, a term that describes investors that invest for themselves and not for a company or organization. His employer, Calvert Foundation, is working to extend investment to the average American. Since 1995, the Foundation has connected more than 13,500 individuals to impact investments, raising a collective $900 million in capital.

In an article published by the Federal Reserve Bank of San Francisco, Caroline Bressan and Eliza Erikson – both former Calvert Foundation employees – wrote that individual investors are “the lynchpin to appreciably increasing the flow of American capital to disadvantaged communities.”

They continued, “This retail capital can enable an industry such as microfinance or community development finance to reach a scale that would otherwise be impossible when relying on traditional capital sources for social organizations.”

The greatest obstacle? Inadequate channels to connect the individual investor to the investment. For that reason, Calvert Foundation spent years positioning itself to be easily accessible and available on brokerage firm platforms.

However, few other impact investing funds have entered this market due to high barriers to entry.

“We had to forge our own path,” Conway said. “And no other private impact investment fund has become as accessible yet, but we’re excited for others to enter the space.”

Folake Oguntebi, Director of Marketing with ImpactAssets, agreed that regulations to protect investors have made it cost-prohibitive for fund managers to offer such investments to the small-scale investor.

ImpactAssets, a 501(c)(3) financial services nonprofit, has its own donors’ fund, but the fund does not generate a return nor does it repay the principal (lenders can choose where to grant the money). Investors must have a minimum of $5,000 to open an account.

This structure is not unusual. Of the 200 impact firms identified by the Aspen Network of Development Entrepreneurs (ANDE), very few are within financial reach of the everyday investor and, while they certainly welcome donations, almost none offer a return.

Oguntebi said that part of the hurdle is that the Securities Exchange Commission (SEC) prohibits lending to unaccredited investors. Because accrediting a potential investor can take time and money, most fund managers don’t bother (the $100 or $1,000 a retail investor would lend is not worth their while).

Oguntebi sees some promise in the newly proposed Title III under the JOBS Act, which would make it possible for people to invest without being accredited. Those who have been following the SEC’s deliberations say it would “democratize” the field, by allowing the average American to invest in mission-driven funds. Yet, how Title III would function in practice and who would be able to source investments remains pending. The SEC published the proposed rules for Title III in October and public comment period ended in early February.

“If and when Title III…gets passed, this could represent a windfall for social enterprises and the impact investing space as a whole,” Oguntebi said.

Just how big is the potential market for retail impact investing? To date, very little market analysis has been done on this segment. But, if you take into account that 88 percent of American households (101 million households) donate to charity, according to the National Philanthropic Trust, and that the retail market for investing is made up of 91 million investors (52.7 million households), according to BNY Mellon; the demand for individual impact investing – a hybrid of the two – is likely gigantic.

What will it take to reach these small-scale investors? While Title III would help, a report authored by Hope Consulting in 2010 found that as many as 45 percent of potential investors said they would invest if the opportunity were accessible through brokerage firms and financial advisors.

Convincing brokerage firms to list impact investments requires pressure from both individual and institutional investors (to demonstrate demand) as well as involvement from other impact funds (to expand supply), which is something Calvert Foundation continues to pursue, according to Conway. But it also would require investor awareness, the lack of which hindered eBay’s efforts to scale.

Conway hasn’t given up: “Our goal is to build from the growing interest in this space to get more investment capital flowing,” he said. “In addition to being a gateway for investors ourselves, hopefully Calvert Foundation can help other funds serve the retail investor.”

Chrissie Long is a freelance journalist who covers higher education for University World News. Her work has appeared in the Christian Science Monitor, the Miami Herald, and the Latin Trade Magazine. Most recently, she directed a nonprofit focused on health and education in Central America. She is a Master in Public Policy candidate at the John F. Kennedy School of Government at Harvard University.