Home > Blog > Lost in the Snow: When The Media Met the Polar Vortex 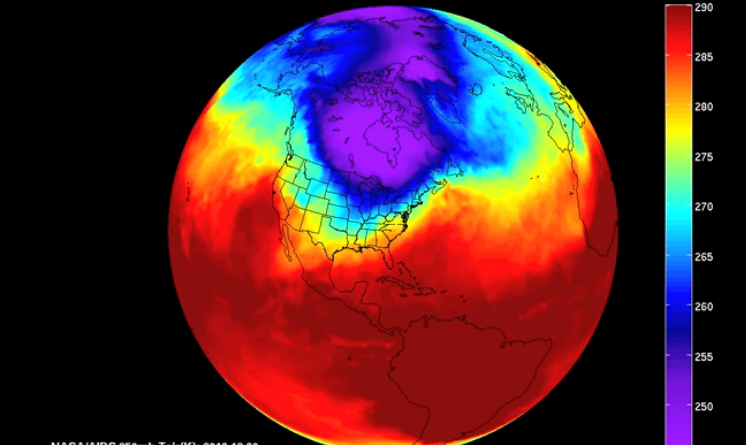 Climate change is transforming the circulation patterns which bring us our weather, but do journalists have enough scientific understanding to tell us what’s going on?

2014 was the year a polar vortex came to town, wreaking wintery havoc for months on end. Reporters were quickly on its tail. “Trapped in a ‘polar vortex’: Midwest gripped by arctic cold” warned CBS News. “Raw: ‘Polar Vortex’ grips Chicago” reported USA Today. Survival guides proliferated: ABC News released “13 Things You Didn’t Know You Needed to Survive the Polar Vortex”, The Huffington Post gave us “11 Ways to Survive Chicago’s Polar Vortex”, and The Guardian chipped in with “How to Survive a polar vortex, according to the Germans”.

Fox showed the vortex a friendlier face, posting “Stunning photos of frozen tourist sites from America’s polar vortex”, while The New York Times was more cynical, reporting “The so-called polar vortex, as some meteorologists are describing this weather pattern, will also bring the coldest temperatures in years as far south as Atlanta and Nashville.”

While it certainly got attention, the polar vortex was misunderstood from every side. Contrary to what the press suggested, the vortex didn’t whirl up out of nowhere just to plague the Midwest. It was never ‘America’s polar vortex’ or ‘Chicago’s polar vortex’. There is only one polar vortex, and it’s a gigantic, permanent feature of our atmosphere that has been well established since 1853.

It might seem excessively Harvard to pick out science bloopers on the internet, but there’s more at stake here than factual reporting. To understand the impact climate change is having on our everyday lives, we need to understand how it affects the weather we see when we open the curtains. It’s a complicated and uncertain connection, so it’s important that our news sources are able to tell a polar vortex from a snowstorm.

Global circulation patterns, like the polar vortex, are crucial to creating our liveable climates. Because the equator gets much more heat than the poles, winds and ocean currents carry heat up north to spread it out. As they travel, they are pushed in different directions by patches of high and low pressure, the rotation of the Earth, and the position of continents. Under these forces they take up recurrent patterns. The atmosphere is still pretty chaotic, so weather varies every day, but because of global circulation patterns some kinds of weather are more likely than others.

Polar bears aren’t just climate pin-ups because they’re so cute; they also live right on global warming’s frontline. The arctic is heating up faster than anywhere else. This means that summer sea ice is disappearing, leaving bare the dark choppy waters of the Arctic Ocean which are as good at absorbing heat as the ice was at reflecting it. It’s a dramatic albedo change, increasing the temperature and the air pressure, and weakening the polar vortex.

I’m not saying that the press should start reporting all weather events as harbingers of manmade climate change. Weather is complicated and climate change is happening quickly. Scientists haven’t even had time to work out what mechanisms link greenhouse gas concentrations and weather, so they can’t possibly say for certain if climate change is behind a single weather event.

The southerly polar jet stream might have nothing to do with shrinking summer sea ice. For example, the jet stream is also set by swings in South Pacific temperatures, and we know that in some years it’s just weaker than in others.

Teams of scientists are pulling ranks to investigate how the weakening of the polar vortex is playing out in the Earth system, but it’ll take several years if not decades to get a good picture.

However, just because the connection of weather to climate isn’t clear-cut doesn’t mean it shouldn’t be reported: indeed it must. The media is supposed to keep us informed about important changes in the world around us. Over a few decades, a major feature of our atmosphere, controlling winter temperature across the northern hemisphere, has dispersed, and reporters didn’t even know what it was when a piece floated our way.

There were some journalists who did a better job. Andrew Freedman at Climate Central, a leading blog on the topic, was able to present the idea that climate change might be behind the freezing weather alongside a thorough account of the scientific debate. In more mainstream channels, Terrell Johnson at The Weather Channel showed a fascinating simulation of how the vortex has broken up in the last few decades. Another great example was Associated Press science writer Seth Borenstein who neatly summed up the possible explanations in a 3 point list. The White House also provided a video with Dr John Holdren, the United States President’s science advisor, which reached a wide audience.

These commentators provide examples of quality reporting on extreme weather, but it must expand to all mainstream channels.

Climate change is the story of our time, but how can that story be adequately told if journalists don’t understand the basics of our climate?

Megan Albon is a visiting student at Harvard University, studying for one year on a Herchel Smith Scholarship from Emmanuel College, University of Cambridge. Having completed her undergraduate degree in Geography, including thesis research on Ethiopia’s remaining coffee forests; Megan is using her year at Harvard to move in to science journalism.