Home > Blog > He Said, We Said: Breaking Down the State of the Union, Part 2 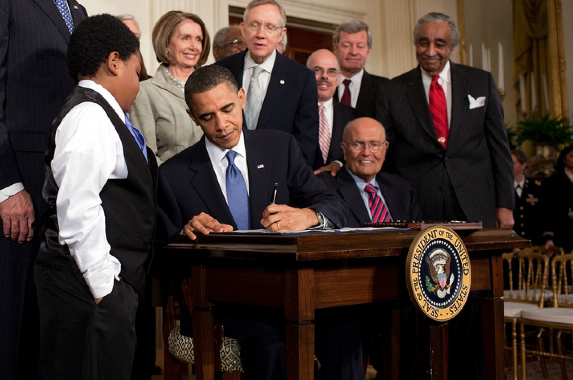 It is clear that President Obama wants to move the conversation forward on health care. In the State of the Union address he acknowledged the early struggles launching health care exchanges, but he quickly turned to the successes of the Affordable Care Act (ACA).

Speaking directly to the American people, he called on every American to help their neighbors sign-up for coverage by the March 31st deadline. He also subtly highlighted a demographic key to the ongoing success of the exchanges – young adults. Young and healthy enrollees would balance the risk and cost of older, sicker enrollees. Enrolling young adults will continue to be a priority for the administration over the last two months of open enrollment.

He also called on Congress to move the conversation forward. He asked Congress to present new ideas and not to refight old battles with “. . . another forty-something votes to repeal a law that’s already helping millions . . .” These remarks are particularly important because they reset the status quo in health care policy.

In an appeal for broader support, President Obama highlighted the work of Kentucky Governor Steve Beshear. Governor Beshear established a state-based exchange and expanded Medicaid in a traditionally conservative state that is home to prominent Republican Senators Mitch McConnell and Rand Paul. Highlighting Kentucky not only illustrated the benefits of the ACA, but it also allowed him to indirectly target Senator McConnell, who Democrats hope to unseat in the upcoming election.

President Obama must continue to promote exchange enrollment and Medicaid expansion. However, he should not lose sight of a significant source of funding for this expanded access that went unmentioned – Medicare cost savings. President Obama will need to continue to lay the foundation for promoting quality and efficiency to ensure the long-term viability of expanded access.

On Tuesday night, President Obama touted an all-of-the-above energy strategy for America. He hailed a domestic oil industry whose production surpassed imports last year, unprecedented investment in natural gas, and global leadership in solar energy development. But those words were merely a moderate prelude to a much stronger statement about U.S. environmental policy.

The President called for an end to subsidies to the fossil fuel industry. He highlighted the development of carbon pollution standards aimed at pushing the U.S. away from coal power. He even labeled natural gas a “bridge fuel,” implying a desire to eventually move away from that cleanest of fossil fuels. His segment on energy and environment ended with firm message: Climate change is a fact, and we fail if we do not do all we can to prevent it.

Truth be told, I expected more on the President’s landmark Climate Action Plan, as well as his executive branch’s push to regulate carbon pollution under the Clean Air Act. However, the State of the Union is often used more for rhetoric than for hard policy. I think Clean Air Act regulation of power plants remains a top priority for the President in 2014.

Court watchers saw few fireworks at this year’s State of the Union, as President Obama did not mention the Supreme Court by name as he did in 2010 after the decision in Citizen’s United v. FEC. The chances of that happening were slim, with Presidents directly mentioning the Court only about 5% of the time in the last 85 State of the Union addresses. Despite this low frequency, I predicted three recent and upcoming cases that could feature in the State of the Union: Shelby County v. Holder, which gutted the Voting Rights Act, McCutcheon v. FEC, which could substantially increase the amount of money in politics, and United States v. Windsor, which struck down the federal ban on gay marriage.

These predictions were not far off the mark with President Obama referencing the decision in Shelby County, and touching on the underlying issues in McCutcheon and Windsor. The most interesting part of these references, however, was the significant amount of content lay imbedded in several brief remarks on these topics.

The most direct reference to the Court by President Obama was to the Shelby County decision from last summer, which eliminated the requirement in the 1965 Voting Rights Act that states with a history of voter discrimination to pre-clear any changes in their voting laws. The Act had been most recently renewed in 2006 by a vote of 98–0 in the Senate, and President Obama referenced the Court’s decision as an opportunity for bipartisanship, saying, “Last year, part of the Voting Rights Act was weakened.  But conservative Republicans and liberal Democrats are working together to strengthen it.”

Sticking with the topic of elections, President Obama continued by weighing in on the underlying issue in McCutcheon. In this case that the Supreme Court has yet to decide, Sean McCutcheon and the Republican National Committee want to strike down the aggregate contribution limits that individuals can make to campaigns. The change could inject significantly more money into politics by wealthy donors as the contributions individuals could make would move from $123,200 to $3.63 million. In a brief sentence, President Obama summed up the problem of having too much money in politics, saying, “It should be the power of our vote, not the size of our bank account, that drives our democracy.”

Finally, President Obama did not use last summer’s decision in Windsor to lay out an action plan for LGBT rights, but he did use carefully crafted language that builds on the victory in the Court. The decision in Windsor struck down part of the Defense of Marriage Act (DOMA) that limited the federal definition of marriage to heterosexual couples. The decision shifted much of the battleground for marriage equality to the states, and federal courts reviewing state laws limiting the definition of marriage. President Obama acknowledged this movement saying, “Across the country, we’re partnering with mayors, governors, and state legislatures on issues from homelessness to marriage equality.”

President Obama made one other reference to LGBT rights later in his address. He prefaced a comment about the Winter Olympics in Sochi, Russia – where the Russian government has passed a series of anti-gay laws – saying,  “[W]e believe in the inherent dignity and equality of every human being, regardless of race or religion, creed or sexual orientation.” The reference to inherent dignity and equality is a statement of long held American values, but it also resonates with the language and legal basis of Windsor, and was surely not lost on Justice Kennedy who wrote the majority opinion in the case. Justice Kennedy’s jurisprudence is known for incorporating the concept of dignity, and he relied on this concept in Windsor to find DOMA a violation of the equal protection clause of the Fifth Amendment. For example, in Windsor Kennedy wrote,

This status is a far-reaching legal acknowledgment of the intimate relationship between two people, a relationship deemed by the State worthy of dignity in the community equal with all other marriages.

President Obama’s brief mention of these concepts in the State of the Union affirms that reading of the US Constitution, and promotes these values in the public discourse – both in the United States and around the world.

Patrick Kibbe is a joint degree candidate in public policy and law at the Harvard Kennedy School and at Harvard Law School.