Home > Blog > We all live in Bhopal: Global Protest Against Corporate Impunity 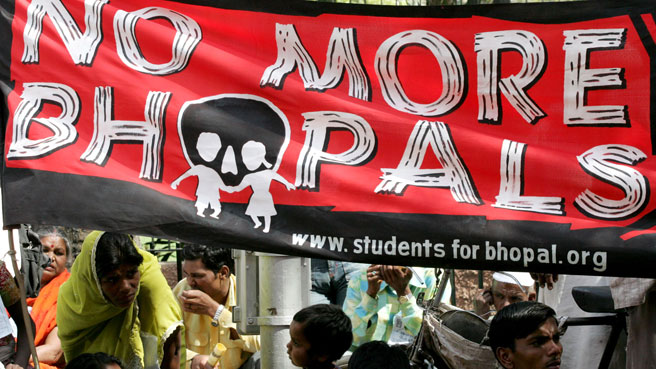 As the city slept, the killer silently crept in. From the windows, doors, ledges and crevices, it came in silently, slaughtering not just hundreds but hundreds of thousands of innocent victims. The killer’s name was methyl isocyanate, and in 4 hours it instantly killed 8,000 people and maimed another 200,000.

At midnight on Dec. 3rd, 1984 in Bhopal, India, 27 tons of methyl isocyanate, a lethal gas, leaked from a pesticide plant owned by the Union Carbide Corporation (UC), poisoning and blinding hundreds of thousands of people.

After stalling the matter in legal and bureaucratic circles in India and the United States, in 1989, Union Carbide negotiated a deal with the Indian government to pay just $400 to each victim. The deal was struck with no consultation with survivor groups and vastly undercounted the number of people affected.  Union Carbide refused to take any responsibility for the disaster and even blamed a supposedly disgruntled Indian employee for the leak. In 2001, UC was acquired by Dow Chemical, which also refused to acknowledge any responsibility.

Twenty-nine years after the disaster, the death toll is 25,000 and counting, while 100,000 people still suffer from chronic exposure-related illnesses. Union Carbide left without cleaning its factory, abandoning huge quantities of lethal chemicals at the site, and bulldozing thousands of tons of highly toxic waste into huge solar evaporation ponds. These chemicals are leaking into the water supply of 30,000 people living near the plant. Cancer rates and birth defects have soared, but Union Carbide and Dow Chemical refuse to even clean the site.

The inadequacy of Union Carbide’s response was evident right from the beginning. A press cutting from weeks after the disaster records how American lawyers descended on Bhopal promising vast sums to the victims. Prominent among these was Mr. Melvin Belli, a flamboyant attorney from San Francisco whose law firm had represented many famous people. Belli counted off the names of film stars, and then added: ‘But these people in India are nobodies. Some poor little bastard living in a railroad shack goes home to find his wife and child dead. Now Union Carbide has the effrontery to offer a fucking orphanage and a million dollars. It is a monumental goof.’

A great catastrophe, followed by years of sickness, poverty and injustice can overwhelm and crush the human spirit, or it can enable ordinary people to discover that they are extraordinary. For nearly three decades some of the poorest people on earth, iliterate and without funds, powerful friends or political influence, have struggled for their lives against the world’s biggest chemical corporations, their allies in the U.S. and Indian governments, and an army of hired lawyers, lobbyists and PR agents. Undaunted by these odds or the depth of their suffering, the Bhopali survivors have never given up in their struggle for justice. Most can look back on a lifetime of street demonstrations, sit-ins, roadblocks, boycotts, and hunger-strikes. They’ve staged exhibitions, satirical awards, concerts, and street theatre and created some of the most extraordinary protest art ever seen.

As the 29th anniversary came and went without remembrance in India or the United States, it seems that the world has chosen to forget the world’s worst ongoing industrial disaster. The two governments of India and United States have chosen to ignore the hundreds of thousands of poor people who have suffered and continue to suffer. Dow Chemicals (formerly Union Carbide) has decided that $400 is compensation enough for losing a family member and that even cleaning up their mess is not worth any more of their precious dollars.

The struggles of ordinary people to assert their fundamental human rights in face of the power, greed and heartlessness of giant corporations will be the defining battle of the twenty first century. The struggle for justice in Bhopal is in the front line of that battle. Some of that battle is fought in the courts or on the streets, but the crucial battlefield is in the heart.

And the heart is where the struggle touched a group of Harvard students who, after hearing the story directly from survivors, decided to join the International Campaign for Justice in Bhopal (ICJB) and other community organizations in their struggle to bring justice to Bhopal survivors. To draw attention to the ongoing struggle, a candlelight vigil and protest was organized at Harvard Square, Cambridge to commemorate the 29th anniversary of the disaster. In order to build widespread support and awareness for the cause a 365 – day global relay fast was also launched. The goal of the fast is to draw attention to key survivor demands: clean-up of the contaminated site, medical relief and economic rehabilitation of all survivors, and prosecution of Dow Chemical, whose subsidiary Union Carbide’s pesticide factory was the site of the 1984 disaster.

Speaking on the occasion of the anniversary, Harvard graduate student Mr. Arif Hussain said “The fast is both a means of expressing our collective outrage over what is happening in Bhopal as well as a vehicle to globally amplify the voices of the survivors.”

Leonid Chindelevitch, an ICJB volunteer said that Dow’s irresponsibility is setting a dangerous precedent for the future behavior of transnational corporations by showing that they can escape from being liable for social and environmental harm caused by their actions.

While the situation on the ground in Bhopal is grim, Nitin Gujaran, an AID volunteer and a software engineer working in the area is hopeful that the 30th anniversary year will energize a global movement for justice in Bhopal as well as increase awareness about other such disasters.

Bhopal is a grim reminder to us all that we live in a profit maximizing, toxic, industrial society which if not held accountable, can lead to unimaginable human disasters. In some ways we all live in Bhopal.

The ongoing fast is just a small collective effort towards raising a voice for holding Dow accountable and providing justice for victims of Bhopal. To support the cause, sign up for a day of fast in solidarity with victims of Bhopal by clicking on the link here.

Shashank Shukla a Mason fellow at the Harvard Kennedy School of Government and aspires to be a politician back in India once he graduates in 2014. From being a trainee fighter pilot, to a corporate consultant, to a social entrepreneur, to being a Teach for India fellow teaching street and juvenile children, to leading a program for the homeless across India, Shashank believes in filling his life’s canvas with as many colorful dots as possible.