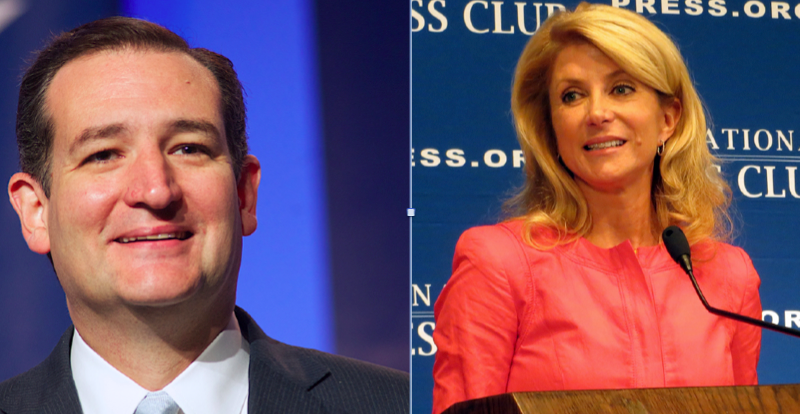 Anyone who follows recent political news knows that Texans like to talk. First, there was the stylish, hot-pink Mizuno sporting Wendy Davis and her fervent defense of abortion rights. Then came the fiery, Dr. Seuss-quoting Ted Cruz and his passionate opposition to Obamacare. Thirty-two hours and hundreds of thousands of words later, what is perhaps most surprising is exactly how much these long-winded Texas have in common.

Some of the similarities are clear. Both Davis, a second-term state senator from Fort Worth, and Cruz, the state’s junior United States Senator, have grown into bona fide folk heroes as a result of their passionate displays.  In June, Davis stood for more than 11 hours, voicing opposition to strict measures limiting abortion rights in her home state. With the help of a back brace and raucous support from spectators, Davis delayed a vote on the bill until after the midnight deadline, marking the end of the legislative session. More than 200,000 Americans watched a live stream of the Texas State Senate as Davis established herself as a sort of liberal heroine in a state that’s as red as they come.

Cruz—whose dramatics did not quite technically constitute a filibuster—spoke for more than 21 hours to delay the vote on a US House spending bill and rally support for defunding Obamacare. While his opposition to the legislation and his hardball tactics during the government shutdown left him with plenty of enemies in Washington, he has also garnered a sort of conquering hero’s status among many Texans. His take-no-prisoners approach was celebrated at a number of rallies across the state immediately after the shutdown, and a recent Pew poll suggests that Cruz’s favorability rating among Tea Partiers has increased by more than 27 percentage points since July, with his favorability among all Republicans rising by 11 percentage points during the same period.[1]

Both Texans also hope to use this media stardom to accelerate their political careers. The filibuster helped Davis catapult herself from relative obscurity to declaring her candidacy for governor in 2014. While she faces serious obstacles on her journey to the governor’s mansion—including broadening her appeal beyond her pro-choice advocacy—Davis’ 11 hours on the floor of the Texas Senate altered the trajectory of her career.

Cruz—who has long set his eyes on the 2016 race for the White House—sees his unapologetic criticism of Obama’s healthcare plan as a career move. His passionate display of disdain fuels his image as a Washington outsider, a sort of hero for the common man battling the Washington machine. And it is precisely this heroic image that Cruz is counting on to win the White House in three years.

Yet, while recent events point to the similar political tactics employed by the two Texans, we cannot forget that Davis and Cruz could hardly be more ideologically opposed.  Davis used her 11 hours in the spotlight to combat a restrictive abortion bill, a move that have led some to believe that Texas may be purpling—even if only a little. Meanwhile, Cruz’s time in the limelight highlighted his affinity for the deepest red.

Who then actually represents Texans? Davis? Cruz? Neither? Both?

The answer is: likely not Davis—at least not yet. A poll conducted by UT/Texas Tribune just before Davis’ historic filibuster suggested that a majority of Texans supported banning abortions after 20 weeks, along with other measures included in the proposed legislation that she so vehemently opposed.[2] Of course, Davis currently represents her Fort Worth district, not the entire state. She does not yet purport to represent the average Texan.  Don’t get me wrong: she surely represents an aspirational Texas. The Texas she hopes will one day be. Yet her progressivism may still be a bit too much for the Texas of today.

In fact, no Democrat has served in the governor’s mansion since the election of Ann Richards in 1990. It seems unlikely that a state in which Republicans control all statewide elected offices, have a majority in both chambers of the state legislature, and comprise a majority of the state’s federal delegation, will elect Davis to the governorship next fall. She is working hard to broaden her appeal, emphasizing access to health care and education. Yet while she may represent the purpling of a deeply red state, her time, perhaps, has not yet come.

But Cruz seems an even more unlikely representative of the average Texan. His desperado tactics in regards to the government shutdown lost him support among Texans, according to a recent UT/Texas Tribune poll. His support among Texans now rests at 38 percent.[3] How can a representative who fails to carry a favorable opinion among the majority of his constituents purport to represent the average Texan?

Perhaps it is redistricting and the advent of more safe seats that has allowed for increased polarization in Texas and the decline of the Texan center. Perhaps it is the media attention paid to these long-winded speeches by both the left and right. Whatever the reason, two Texas politicians have received significant media attention over the past few months. I would venture to say that neither actually represents the average Texan –if such a citizen even exists in the Texas of 2013. Davis and Cruz may represent their own aspirational Texas—the Texas they long to see. But they do not represent the real Texas.