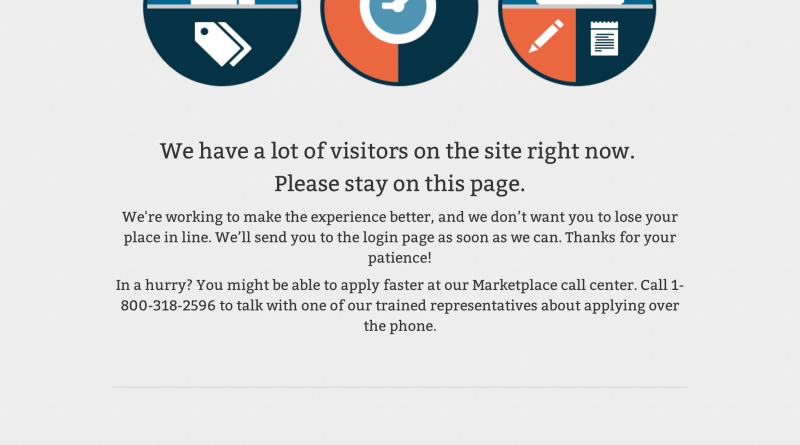 Federal health insurance exchanges (also known as insurance marketplaces) are off to a slow start. As we await the first official enrollment figures in mid-November, however, it is important to recognize that a slow start is not a surprise. Most of those who have been forecasting exchange enrollment over the last year have assumed enrollment would grow over time with the increase of both awareness and penalties for remaining uninsured. The Congressional Budget Office (CBO), for example, projected that enrollment would build significantly over the first four years before stabilizing in 2017.

While the slow start is not necessarily troubling, the reason behind it is. Technical difficulties have plagued the federal exchanges. Those attempting to enroll have experienced long wait times, confusing error messages, and lost data. Many have been unable to log in to the web site, and some have even been unenrolled without their knowledge due to technology errors. Since it is difficult and time consuming to enroll in plans through the exchanges, those most likely to follow through on enrolling are those who need health coverage the most — older, sicker individuals. Young, healthy adults are disproportionately less likely to persist since they do not have acute health care needs, according to health care experts and insurance companies.[1]

These technology barriers are exacerbating an already important concern that too few young adults will enroll in health insurance exchanges. In Massachusetts, where a similar health reform was enacted in 2006, the uninsurance rate among young adults (aged 19-26) fell by more than 60% the following year.[2] The success of the Massachusetts exchange was driven by strong enrollment and awareness campaigns, including the support of the Red Sox.[3] Despite strong enrollment, however, the uninsured are still more than three times as likely to be young (aged 19-25). [4] The Massachusetts experience demonstrates the strong effort required to enroll the young and healthy, which the federal Department of Health and Human Services (HHS) recognizes. As Mandy Cohen from HHS explained to NPR this summer:

We also know that they’re most heavily marketed to, so it’s really hard to break through to this group [young adults]. . . We know we had to put an extra emphasis on the 18- to 35-year-old cohort. [5]

The stakes are high if young adults fail to enroll in health insurance exchanges. Health insurance companies will likely face higher costs than anticipated, and their profits are not all that will be lost. A failure to enroll the young and healthy could compromise the future success of exchanges. Insurance companies may raise their premiums or limit the number of plan options available for 2015. They could also decide to exit the exchange market altogether, further limiting options on the exchange.

Doomsday for exchanges is not inevitable, though. HHS anticipates that the federal exchange website will be running smoothly by the end of November, and there are almost five more months of open enrollment with discussions on extending the open enrollment period. Given the significant negative press surrounding the federal technical difficulties, however, catching up on enrollment will require more than fixing the technology issues.

There is this real worry people who hear about glitches think that’s us and so don’t even try. I was at the Contra Costa Board of Supervisors and they were saying, “So our constituents are worried the system isn’t working because we hear the ability to enroll in the Affordable Care Act isn’t working.”[6]

Thus, while correcting the technical problems is necessary, it is not sufficient. The federal exchanges will need to regain public trust to overcome this negative press. Regaining the trust of the young and healthy will require aggressive, targeted enrollment campaigns, but it is key to getting federal health insurance exchanges back on track for the right kind of slow start.