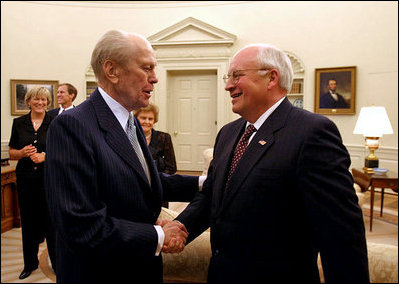 Whatever you think about former Vice President Dick Cheney, his upcoming book Heart provides new fodder for debates around the 25th Amendment and America’s system of presidential succession.  Cheney’s imperilled health during his term in office demonstrated that the 25th Amendment and the nation’s procedures for handling inability, disability, and vacancy in the nation’s top positions may be due for further examination.

In Heart, Cheney unveils details about his time in the White House and his relationship to his infamous cardiac issues. As detailed this week by 60 Minutes, Dick Cheney sat a heart-beat away from the presidency even as Cheney himself struggled to keep his own heart beating. Given his poor health, Cheney drafted his own letter of resignation in 2001 to create a means to remove an incapacitated vice president. What Cheney feared was another major heart attack, one that would leave him alive but unable to respond to the duties of his office.

Ratified in 1967, the 25th Amendment has been tremendously important in its short history. Among other things, the amendment created a process to replace a vacant vice presidential role, which had been sorely lacking.

For 35 years of its history, America was without a Vice President. For example, James A. Garfield’s untimely death within his first year in office left the country in the hands of Chester A. Arthur. When Arthur assumed the presidency, there was neither a sitting Speaker of the House of Representatives nor President pro tempore of the Senate. In fact, Arthur drafted a letter that would have clarified this Constitutional conundrum if he had died during this period. Little known at the time, Arthur also suffered from Bright’s Disease, a kidney disorder which eventually took his life. Another example was the case of William Rufus King, Franklin Pierce’s Vice President. King was so ill from tuberculosis that he described himself as “looking like a skeleton.” He attempted to recuperate in Havana, Cuba and was too sick to make it back to Washington for the 1853 inauguration. Congress allowed King to take the oath of office outside the country. King died within 60 days of taking office, leaving Pierce without a vice president for the remainder of his administration.

Following the 25th Amendment’s ratification, its significance was showcased many times. President Nixon invoked the Amendment to replace Spiro Agnew, who had resigned his vice presidential office amidst criminal allegations. Gerald Ford was soon confirmed to fill the open position. Vice President Ford advanced to become President Ford, again as directed by the 25th Amendment, when President Nixon resigned during the Watergate affair. Ford himself used the amendment to nominate Nelson Rockefeller to be his vice president during his brief administration.

In addition to replacing a vacant vice presidential seat, the amendment dictates a procedure to replace disabled and incapacitated presidents. Under this system, our nation has seen three episodes of vice presidents “acting” as president. Each of these occasions has involved a president going under sedation for a medical procedure. Like it or not, we have twice seen a “President” Cheney, when President George W. Bush went under for colonoscopies in 2002 and 2007.

The 25th Amendment and America’s succession processes are not without their challenges. The amendment’s provisions were not invoked in the aftermath of Ronald Reagan’s attempted assassination in 1981. Amidst the chaos surrounding the incident, then-Secretary of State Alexander Haig jumped several places ahead in the line of succession and declared “I’m in control now in the White House.” In addition to such non-invocations of previously-used provisions, the amendment has a process which has never been utilized. Section 4 of the amendment empowers the vice president to assume the presidency upon a majority vote of the Cabinet or other Congressionally-designated body. Such a provision would allow a vice president to wrestle control of government from an incapacitated president, at least in theory or on television shows like Fox’s “24.” Regardless of any portrayals in political dramas, the administration of this provision is yet to be seen and tested in reality.

The challenges of presidential succession abound. Dangers are ever-present and the risks immense, especially during large-scale events such as the State of the Union or the Inauguration. Thinking through succession procedures helps guarantee the continuity of government during times of potential political and societal turmoil. Ideally, Cheney’s revelations about his health and his standing resignation letter provide new lessons for further refinement of the nation’s succession procedures, especially regarding vice presidential incapacity. Succeeding in presidential succession means having the right structures in place to ensure an effective and efficient transfer of power during tumultuous times.