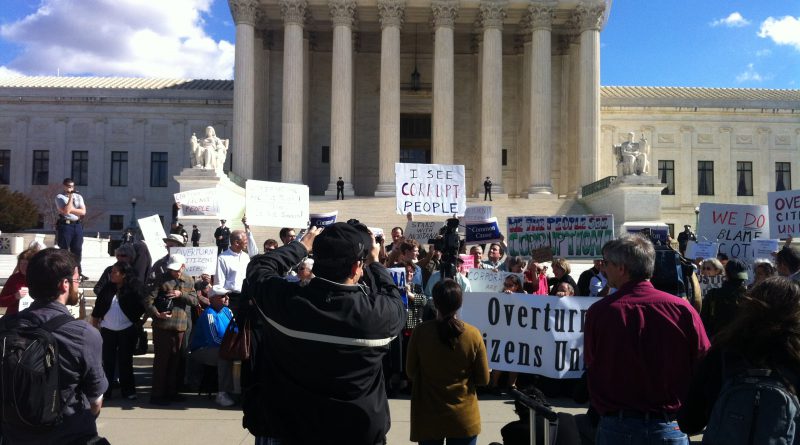 Today, the Supreme Court will hear oral arguments for a case that could be worse for the American public than Citizens United v. FEC, and unleash countless millions of special interest dollars into political campaigns. In this case ­– McCutcheon and the Republican National Committee v. FEC – Shaun McCutcheon, an Alabama businessman, has teamed up with the Republican National Committee (RNC) to try to eliminate the aggregate spending limits for federal elections that are in place.

But don’t be fooled; McCutcheon and the RNC are trying to chip off a pretty huge chunk.

McCutcheon’s view challenge would blow the lid off the amount of money the super rich could contribute to campaigns and influence politics compared to the average American. According to the U.S. Census Bureau, the median American family makes $52,762 a year. What would be a reasonable limit that any individual, in accordance with a constitution that begins “We the people,” could contribute to campaigns to ensure that elected officials represent all people and not only a select few? $10,000? $20,000? $52,762?

But here is the problem for the American people: the same justices that struck down the distinction between the political speech of people and corporations in Citizens United are now going to be deciding McCutcheon.

McCutcheon and the RNC are arguing that the world is different from the one in which aggregate limits were first enacted, and from when the Supreme Court affirmed their constitutionality in 1974. But nothing could be further from the truth. The American people’s confidence in Congress is at historic lows, while the amount of money pumped into campaigns is at historic highs.  McCutcheon and the Republican National Committee v. FEC threatens to inject significantly greater amounts of money into campaigns from an elite few, making a contribution-hungry Congress even more beholden to special interests.

So what can you do to ensure that your voice isn’t further drowned by money in politics? Speak. Campaign finance issues are live around the country, and the voices of many are the only way to balance the money of few.

Patrick Kibbe is a joint degree candidate in public policy and law at the Harvard Kennedy School and at Harvard Law School. This piece is cross-posted at Daily Kos, where it originally appeared.