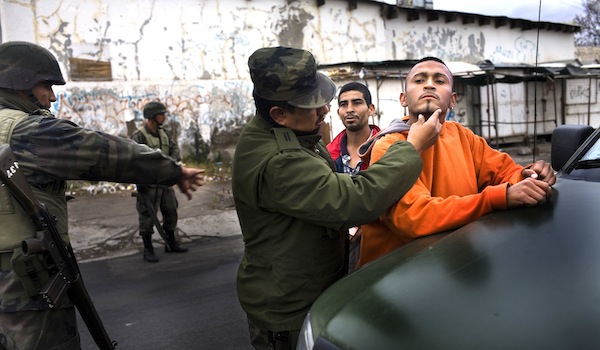 At an undetermined time, somewhere in Mexico, a violent war among drug cartels erupted. For too long it was difficult to elaborate—with absolute certainty—on that statement.

Just after the turn of the millennium, drug lords who had “peacefully” conducted operations to introduce cocaine and other illegal substances into the United States since the early 1950s started battling for turf. The war escalated rapidly, and from 2006 to 2012 it claimed a total of 63,000 lives.

Drug-related violence soon became the talk of the town, the favorite puzzle of academics, and the defining feature of Mexico’s then-president Felipe Calderón’s term in office. His government was the first to begin tabulating drug-related homicides in December 2006 and the one that embraced a war against drug trafficking organizations as its top priority.

During Calderón’s time in office, the body count grew steadily. In 2008 and 2009, Ciudad Juárez, a city of about 1.4 million people that shares a border with El Paso, Texas, was the most violent city in the world. By 2011, nineteen out of the fifty most violent cities were in Mexico.

The Mexican government data on this war, as with most wars, had both the ability to illuminate and obfuscate. There were days when we, meaning those of us citizens who were looking at the data provided by the government, knew that up to nineteen homicides could be linked to drug-related activities within a single city. Such was the case in Chihuahua, a city of 824,000 people, in June 2010. The data also told us that there were times when traffickers took breaks from their violent activities; for example, nobody died in Chihuahua in June 2007. The data told us that traffickers did not like to fight in January, preferred to murder on weekdays, and took days off. They rested on Christmas Eve, even though December was always the most violent month of the year. They fought the most in summer. Sundays were calm.

For too long, these statistics existed in lonely silos. They were isolated, revealing frustratingly small slivers of the war’s personality.

One aspect that was clear from early on is that most homicides take the form of targeted executions. Bodies are normally discovered late at night, dumped into suburban areas or on highways with wounds caused by high-caliber weapons. For their part, the executioners are careful to provide evidence of their cruelty and motives. Victims are beheaded, dismembered, hung from bridges, and littered in public places. Strewn amidst the dump heap of bodies are messages scrawled for the world to see: “The Zetas are here”; “This is what happens to those from La Familia”; or “Mazatlán has an owner.” These messages are meant to claim rights over territories or send specific signals to rival organizations.

Average citizens decry their city being turned into a battlefield. Traffickers are not only killing one another, they are targeting journalists, mayors, and police officers as well. They extort funds from local businesses and kidnap Central American immigrants. Piles of bodies are often found decomposed alongside the territories where the cartels operate. Small border communities are now ghost towns, their former residents having fled for safer passages. Twitter is a depositary of violent stories shared in real time, many of which are not covered by the media.

The pundits around the world who tracked all of this mostly blamed the Mexican government for the escalation in drug-related violence. They saw it as no accident that this exponential increase in drug-related homicides began in 2006, when President Calderón took office and deployed the military throughout the country to fight the cartels. They say he believed that citizens would always support “those who fight the bad guys,” and that he launched the war because “he needed something to legitimize his administration.” A war against crime, they claimed, was a perfect excuse to unite Mexico behind its president.

Of course, Calderón’s administration promptly rejected these critiques. The president claimed that he dispatched the military because the cartels had become increasingly violent and were significantly impacting the rule of law. In some states, criminal organizations were overpowering local police and had consolidated control over local politics. Had the federal government not done anything about this situation, the president claimed, the country would have collapsed.

This debate about the drug war continued endlessly. Blame was assigned. Fingers were pointed. Presidential approval ratings wavered. The truth, however, was that nobody knew when, why, or how all of these problems started.

As important as drug-related homicides are for the international security agenda, we still knew very little about criminal groups in Mexico. We did not know when, precisely, this war started because we lacked basic information about the areas in which traffickers occupied. The “why” and “how” of their territorial seizures were a mystery. Furthermore, we lacked information about the number of drug-related homicides before 2006 because nobody counted this type of murder before. It was impossible to devise a strategy to reduce criminal violence because we did not know what had caused that violence in the first place.

In 2007, Mexico and the United States had started a $1.6 billion war against criminal groups without knowing who the enemy really was.

And then Google came into the picture.