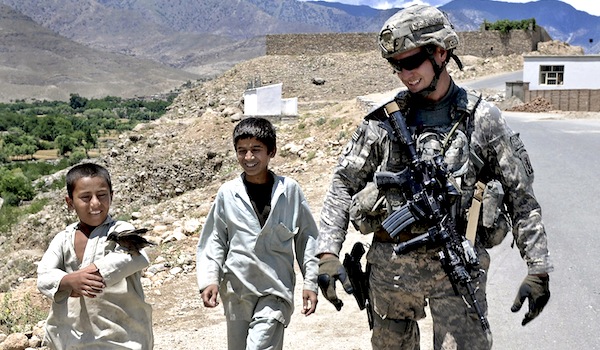 A Book Review of Invisible Armies: An Epic History of Guerrilla Warfare from Ancient Times to the Present by Max Boot.

If there was ever a funeral for U.S. counterinsurgency doctrine, former Secretary of Defense Robert Gates delivered the eulogy. In February 2011, as reported in the New York Times, Gates told cadets at West Point, “Any future defense secretary who advises the president to again send a big American land army into Asia or into the Middle East or Africa should have his head examined.” The message from the man who had been tasked with righting the wrongs of two such wars was simple: never again.

Two years later, it’s even more tempting to declare counterinsurgency doctrine dead. The Iraq war has ended. The war in Afghanistan is winding down. America looks toward the Asia Pacific region, but mostly within. Nation-building has been domesticated. Drones, special forces, intelligence, and cyber capabilities promise to protect American interests at lower cost than large ground forces. So goes the growing consensus in Washington, DC.

Then again, history has a way of, well, having its way. Less than a year before September 11 and America’s subsequent (re)entry into the nation-building business, then presidential candidate George W. Bush said in a debate, “I don’t think our troops ought to be used for what’s called nation-building. I think our troops ought to be used to fight and win war.” If truth is the first casualty of war, “ought to’s” regarding defense planning and the deployment of military force are a very close second.

None of this should come as a surprise, according to Max Boot, a senior fellow at the Council on Foreign Relations. His latest book, Invisible Armies, carries many lessons, but one is more fundamental than the rest: there is nothing irregular about irregular war. Since ancient times, established powers have frequently clashed with opponents too weak to field conventional armies and, therefore, have been forced to adopt guerilla “hit and run” tactics. Conventional warfare, or battle between well-defined forces, has been the exception, not the rule.

Some people aspire to climb mountains, but Boot has built one. At first glance, his 784-page history of guerrilla warfare and terrorism appears as welcoming as Mount Everest. It is organized into eight “books,” which collectively span five-thousand years of unconventional warfare. Armchair generals, social scientists, and aspiring revolutionaries will be happy to find an appendix containing a database of insurgencies and their outcomes since 1775. It bears mentioning that Boot, who has been known to launch his own small wars from the op-ed pages of the Wall Street Journal and in the Weekly Standard, has no partisan axe to grind here.

In most hands, such an undertaking would result in a sleep-inducing encyclopedia, an ornament to be displayed and seen on coffee tables rather than actually read. But reading Invisible Armies is meeting some of history’s most interesting personalities. The cast of characters includes, for example, a young and reckless Fidel Castro, who is more familiar with Ernest Hemingway’s For Whom the Bell Tolls than the classic guerilla texts. Lesser-known figures like British General Gerald Templer, who led a successful counterinsurgency campaign in Malaya during the 1950s, are given their proper place in history.

Having done the historian’s heavy lifting, Boot is able to draw a number of important connections between insurgent and counterinsurgent tactics across the ages. The most important development in guerrilla warfare since World War II, he argues, is the growing importance of public opinion. Aided by technology, insurgents have been getting better at tapping into public sentiment and eroding the will of states to fight insurgencies—battles that are rarely as cheap, fast, or easy as often promised. From the Greeks in the 1820s, to the Algerians in the 1950s, to Hezbollah today, the battle for the public narrative has, in Boot’s words, “become more important than the actual combat in determining the course of events.”

Jonathan E. Hillman is a Master in Public Policy candidate and Presidential Scholar at the John F. Kennedy School of Government at Harvard University. A former research associate at the Council on Foreign Relations, he has written on U.S. foreign policy and national security issues for the Wall Street Journal, the Los Angeles Times, and the National Interest.