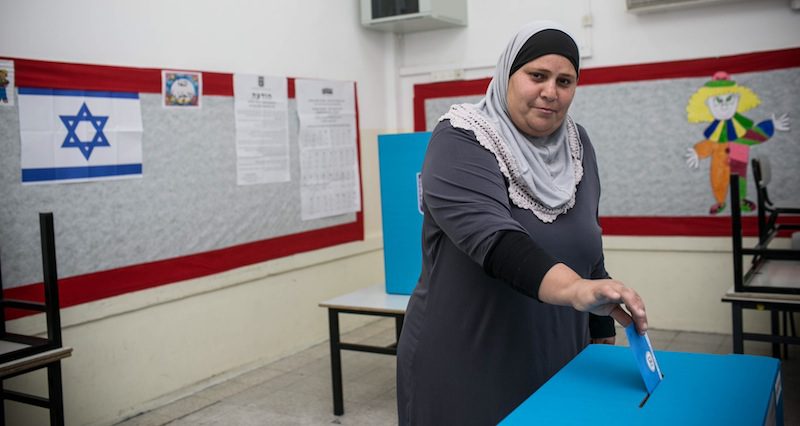 She’s the “most hated woman in Israel,” according to Foreign Policy magazine, and it doesn’t bother her at all.[i] Hanin Zoabi—a member of the Knesset, the legislative branch of the Israeli government—is, undeniably, a force. Elected in 2009, Zoabi is the first Palestinian Arab female elected to the Israeli parliament through an Arab party’s list and is most famous for participating in the 2010 Turkish aid flotilla to Gaza. Called a traitor and temporarily banned from standing for re-election for “undermining Israel,” Zoabi began her second Knesset term in January 2013.[ii]

I met Zoabi last year in Nazareth. As an American who sees far too few women in office in my own country, Zoabi fascinated me. She has brought new international attention to the plight of Israel’s Palestinian Arab citizens (20.5 percent of the population).[iii] Domestically, she has been a voice for Palestinian women in the Knesset, focusing her agenda on high unemployment rates among Palestinian Arab women. After my encounter with Zoabi, I was curious to know: why aren’t there more Palestinian women in Israeli politics? And how can this change?

During the summer of 2012, I interviewed Palestinian women activists in Haifa, Nazareth, and Jerusalem to find out.[iv] These women, who worked both inside and outside of political parties, echoed similar concerns: a lack of opportunities to engage in political parties, especially when starting families; a lack of employment opportunities for college-educated Palestinian women generally, which stifles credentials to run; fear among their parents of political activism; and lack of a connection to the current party platforms. As a high-ranking party member told me, being a woman in politics means “being alone.”

Many women also pointed to a feeling that change was not possible within the Israeli political system, which is committed to the idea of a Jewish state. It was simply not set up for Palestinians to succeed. Zoabi has challenged this notion. She believes that fighting an unjust system from the inside can sometimes be more effective than from the outside.[v] She’s right: Zoabi has successfully used her office—arguably more than anyone else of her time—to draw international attention to the struggles within her community. Rather than conform to the perceived confinement of public office, she has used it to promote dissent.

Today, there are eleven members representing Arab political parties in the 120-member Knesset; Zoabi is the only woman among this group.[vi] By contrast, there are twenty-six women among the 109 remaining members of the Knesset.[vii] Arab political parties must do a better job of recruiting and promoting women for internal leadership positions and for national office. Actively promoting female involvement from a young age and encouraging participation through all stages of life will give more diversity, voice, and strength to Arab party platforms. This is especially critical as Palestinian Israelis increasingly rely on Arab (or so-called non-Zionist) parties to represent their views in the Knesset—or risk becoming disengaged entirely.

In the January 2013 election, only 56 percent of Palestinians voted, down from 75 percent in 1999.[viii] According to a survey that As’ad Ghanem, a political scientist at the University of Haifa, released prior to the election, 31 percent of Palestinians who did not plan to vote said it was because they had no one to vote for, and 26 percent said they were not interested in politics. Only 8 percent based their decision on ideology, such as a decision to boycott Israel.[ix] The bottom line: disengagement is a problem.

Arab political parties would be well served to examine the reasons behind the lack of female involvement within their ranks. Part of this examination should involve finding ways to disabuse the notion that politics cannot change anything. Involving women not only strengthens the party platform, it can also help engage the disengaged and give a stronger voice to the Palestinian struggle from the inside, instead of relegating dissent to the outside alone—or even worse, harboring apathy.

For now, Hanin Zoabi carries the torch for Palestinian women in the Knesset and all the good and bad that comes with it. Let’s hope that one day she’ll have some company.

Catherine Leland is a 2013 Master in Public Policy candidate at the John F. Kennedy School of Government at Harvard University. Through a Cultural Bridge Fellowship with the Harvard Kennedy School Women and Public Policy Program, she spent the summer of 2012 conducting independent research on the political participation of Palestinian women in Israeli politics and volunteering with Mada al-Carmel (Arab Center for Applied Social Research) in Haifa.

[ii] Sherwood, Harriet. 2012. Israeli-Arab politician who was on Gaza protest flotilla can stand for re-election.

[iii] State of Israel Central Bureau of Statistics. 2012. Selected data from the new statistical abstract of Israel, No. 63-2012, 11 September.

[iv] This interview project was part of a Cultural Bridge Fellowship sponsored by the John F. Kennedy School of Government’s Women and Public Policy Program and included volunteer work with Mada al-Carmel, the Arab Center for Applied Social Research in Haifa.