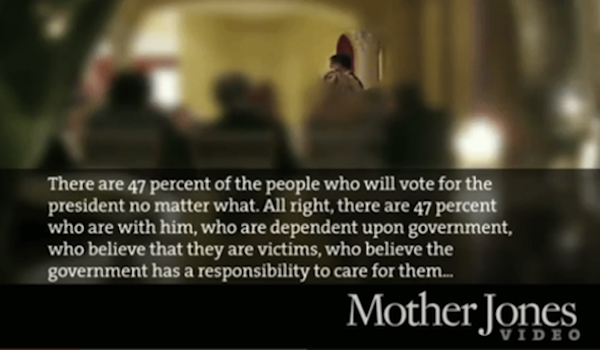 It was “one of these compressed moments, where an entire story is told in a headline,” says Harvard Kennedy School Professor Richard Parker. “The story narrative is so simple—and so powerful—that there is no way that Romney can easily escape.” To hear more of Professor Parker’s discussion of Romney’s “47%” comment, listen to the audio above.

It is not unusual for a presidential candidate to misspeak or stumble as the campaign season progresses. Sleepless nights, manic travel schedules, and staggering expectations combine to almost ensure that mistakes are made. And when they are, they are usually both forgivable and forgettable.

Governor Mitt Romney’s infamous statement disparaging 47% of Americans is unforgettable. And many have not forgiven the arrogance and contempt communicated by his words.

Those words only came to public attention after Mother Jones magazine published the story.

On October 25th, the Kennedy School Review sat with Professor Richard Parker, co-founder of Mother Jones, to learn more about the magazine and the scoop.