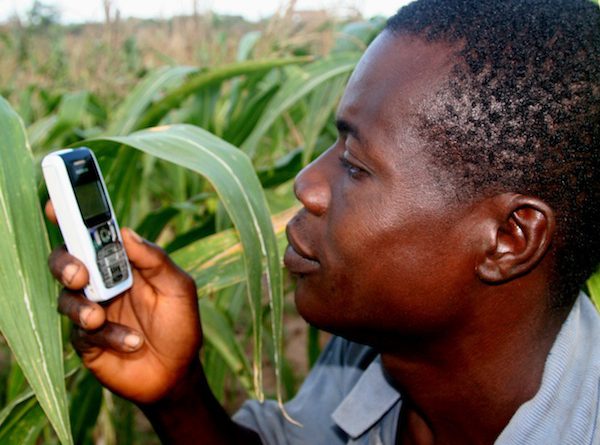 Standing in the heart of a village in northwestern Rwanda, a farmer named Eusebe faces a dilemma. Traders have offered him 36,000 Rwandan francs (RWF), or about US $60 per ton, for his plantains. He hesitates; the farmer knows this is a profitable price, but he has no idea if it’s a good price. A few years ago, Eusebe would have been easily satisfied with an offer that provided even a modest profit. But today he is armed with a mobile phone and decides to send an SMS with the word “plantain” to a service called e-Soko. A moment later he gets an SMS showing the retail price of plantains approaching 50,000 RWF in the capital of Kigali and decides to haggle with the traders until they settle on 42,000 RWF.

The e-Soko project, launched by the Rwandan Ministry of Agriculture in early 2011, provides market price information to rural farmers and cooperatives. It was designed to serve the large swaths of farmers who previously had to sell their goods for a pittance simply because they did not know what price the market would bear. But now farmers have access to a database covering more than sixty agricultural commodities in the country’s forty-one markets, all of which are accessible through SMS (Melhem 2011).

Programs like e-Soko are heralded by techno-optimists as proof that mobile technology can make major strides in uplifting the world’s poor. Their confidence is bolstered by the devices’ rapid spread, which itself seems like a force of nature. Mobile phone penetration in Rwanda grew from less than 1 percent in 2005 to 27 percent in 2010, with three mobile operators competing for the local market (Melhem 2011). Rwanda’s rapid technology adoption, unfortunately, is an exception among developing countries. Many developing nations have struggled to scale up effective government-backed programs that tap into technology’s promise. Often, these countries lack the capacity for innovation and grow programs slowly, if at all.

Barriers to Scaling Up

How does Rwanda succeed in technology-based development where so many other countries have failed? Lant Pritchett, a professor at the Harvard Kennedy School, thinks that the answer might have something to do with what he calls a “capability trap” (Pritchett et al. 2012). He thinks that many developing countries get trapped in processes where they make creeping, paltry gains while failing to make real gains. Pritchett believes development efforts fall into this trap due to incentives for what economists call “isomorphic mimicry” and “premature load bearing.” Put more clearly, this means they take a cookie-cutter approach to development by copying the policies, regulations, and institutional structures of economically successful countries and pasting them unaltered into countries that are unable to support them. The result is that many poor countries appear to be working toward the promise of a better future by looking more and more like prosperous Western nations, while in reality their governmental systems remain functional only on the surface. “At the current rate of progress,” Pritchett said in an interview with Foreign Policy magazine, “it will take literally thousands of years for many developing countries to reach Singapore’s level of capability” (Foreign Policy 2011).

This tendency of aid agencies pushing developing countries to mimic Western institutions is often referred to pejoratively as “Big Development.” By contrast, Rwanda has been able to escape the institutional black hole of Big Development by searching for the most effective ways to meet the specific needs of Rwanda itself. The nation hasn’t held back when those ways diverge from the best practices of Western institutions, even when it also means diverging from their good graces. This approach to development, referred to here as “Smart Development,” illustrates how countries can generate a novel solution to a specific problem through institutionalizing the practice of genuine innovation. This stands in sharp contrast to Big Development, where predetermined solutions are imported with the assumption that applying them will solve essentially all existing problems. The e-Soko program can be seen as a type of Smart Development because it provides a unique solution to a specific problem faced by Rwandan farmers that would have never been encountered in the West.

The Ministry of Agriculture is not the only agency to buck the cookie-cutter trend of isomorphic mimicry and instead become an engine for innovation. The Rwandan Ministry of Health has also rolled out impressive technology-based programs to meet Rwanda’s unique needs. The health ministry is faced with the unenviable challenge of providing HIV treatment to approximately 500,000 patients in isolated, rural areas on a budget that is nowhere near sufficient for the task.

But rather than implode from these health problems, Rwanda took innovative action. It launched a program called TRACnet, which is an HIV-focused information technology system designed to collect and disseminate critical details about patients and drug distribution. Created by the Treatment and Research AIDS Centre (TRAC) arm of Rwanda’s Ministry of Health in 2005, TRACnet addresses the lack of technological infrastructure in rural areas. It does so by using solar-powered mobile phones to enable practitioners involved in antiretroviral (ARV) treatment programs to submit reports electronically and to have timely access to vital information.

The results have been striking. At the end of 2007, the system covered the 168 health facilities that offer ARV therapy in Rwanda, reaching 100 percent of the 43,000 ARV patients in Rwanda (United Nations 2008). In the long run, 400 health facilities will be part of the network. More than 90 percent of users are able to access the system conveniently and cheaply via the toll-free telephone interface with interactive voice response (IVR) technology (United Nations 2008). Physicians are now able to easily and quickly discuss with highly qualified specialists the details of difficult cases from all over the country. This technology has been easily adopted, as most users are accustomed to text messaging from phones after fifteen to thirty minutes of training. As a result of the TRACnet deployment, the number of days between obtaining a blood specimen for a CD4 analysis and physicians receiving results has been significantly reduced (United Nations 2008).

Here is yet another example of a Rwandan institution eschewing isomorphic mimicry and supporting a scalable, truly innovative solution. But it begs the question, how does this happen in a world where so many countries have failed to do the same?

Indeed, Rwanda is famous—or, more likely, infamous—in the eyes of development agencies and donors for taking only partial advice from the international aid community and developing the rest on its own. Crystalizing this ethos is Rwanda’s President Paul Kagame, who argues that traditional development aid “dehumanizes” recipients, robbing people of their dignity. “If that [genocide, violence-ridden] past is never going to happen again, we must grow our economy,” Kagame told Fast Company magazine in 2009 (Chu 2009).

Under Kagame’s leadership, Rwanda is evaluating its own needs, setting its own priorities, and avoiding the prescriptive reform regimes of Western donors. “We do appreciate support from the outside, but it should be support for what we intend to achieve ourselves,” Kagame (2009) writes in an essay in the book In the River They Swim. “No one can assume that he or she knows better than we what is good for us.” This mentality is clearly manifest in successful programs like e-Soko and TRACnet, which follow directly in that path.

In November 2011, Kagame warned the Organisation for Economic Co-operation and Development (OECD), which hosted the 4th High Level Forum on Aid Effectiveness in Busan, South Korea, that developing countries could become dependent on aid: “There is real danger that the huge industry that has been built around aid can become a permanent feature of our development process and perpetuate dependency, thereby directly undermining the very national systems that should instead be strengthened” (Office of the President 2011). Kagame emphasized his concern, chiding a development regime where “developing countries spend more time and energy agreeing on procedures and accounting to donors and an ever-increasing number of related non-state actors than in actual development work, often responding to endless questioning that no answers can fully satisfy” (Office of the President 2011; Tran 2011).

Kagame’s warnings on donor dependency are coupled with his calls for a shift in the aid regime to include emerging economies. Kagame believes countries like China and India, which have recently achieved prosperity, have a unique grasp on what it takes to get out of poverty and could potentially provide valuable lessons to both developing countries and donors. Accordingly, he has called for strengthening “South-South cooperation” to help facilitate the transfer of these lessons and know-how.

In January 2012, Kagame told the International Reporting Project that his goal is to receive no foreign aid. “There will always be strings attached to aid,” Kagame explained. “These strings tie people and deny them their freedom. In time, we will be able to provide for ourselves and stand on our own. We will be free to be who we should be, rather than who we are dictated to be, because that will always come with aid” (IRP staff 2012). The Rwandan story should give pause to donor institutions practicing a one-size-fits-all development program. Rwanda’s innovative programs in agriculture and health have helped farmers like Eusebe receive a better price for their crop and HIV positive patients in rural areas receive better and timelier treatment. The sad irony is that these programs would have been unlikely to emerge if Rwanda had followed the full recommendations of those intuitions providing the most resources to help the country: the Western aid regime. Rwanda’s example highlights the need for a paradigm shift in Western aid implementation, away from the generic prescriptions of Big Development. Rather, Western aid should move toward recognizing that each country has unique challenges and these challenges are best addressed through the contextual innovation embedded in a Smart Development approach. This requires giving a huge part of development work back to local people and their government while challenging them to see donor support less as the answer to their problems and more as a resource for finding their own solutions.

Kagame, Paul. 2009. The backbone of a new Rwanda. In In the river they swim: Essays from around the world on enterprise solutions to poverty. Edited by Michael Fairbanks et al. West Conshohocken, PA: Templeton Press.

John Vrakas is a 2012 Master in Public Administration candidate and Seamans Fellow in Technology at the John F. Kennedy School of Government at Harvard University. His focus on leadership in technology coupled with a background in laser engineering has led to consultation work on mobile technology development solutions and macroeconomic development strategies in developing countries. He is a cofounder of Birzeit, a social enterprise incubator based in the Palestinian Territories.