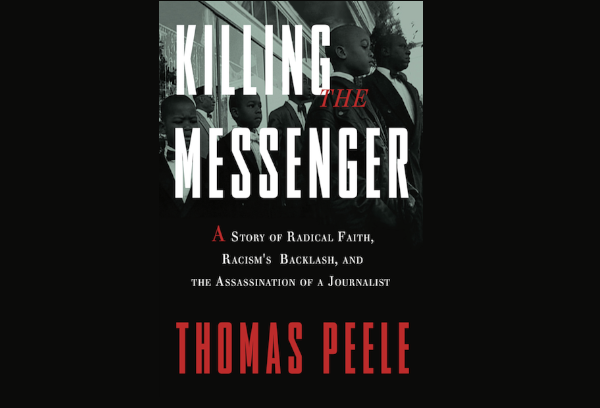 A Review of Killing the Messenger: A Story of Radical Faith, Racism’s Backlash, and the Assassination of a Journalist

Five years ago, a radical Black Muslim sect in Oakland, CA, gunned down the journalist Chauncey Bailey to prevent him from writing a story about them. Bailey’s death exposed the shocking, four-decade history of Your Black Muslim Bakery, a brick compound that housed a cult-like splinter from the Nation of Islam. The Nation had long fed on the festering racism of America’s inner cities, and Oakland was one of the last strongholds for its viciously violent rhetoric. Thomas Peele’s nonfiction narrative in Killing the Messenger explores the Black Muslim movement, including the circumstances surrounding Bailey’s death.

Oakland liked to call itself “The Detroit of the West,” and the comparison was painfully apt, as both were industrial cities marked by major African American immigration and extreme racism, not to mention significant Black Muslim populations. The Nation of Islam was founded in Detroit amid the Great Migration in the early twentieth century, when African Americans left the South in search of better lives in the North only to find that the colder region had institutionalized its own version of the South’s racism and segregation. They were forced into ghettos, then confronted by Southern police officers who had been imported to keep them in line. Typically, factory owners would only hire African Americans for low-paying, menial, or dangerous jobs.

Amid the poverty, unemployment, and despair, an immigrant Afghan named Wallace Fard founded the Nation around 1930. Fard preached African American self-sufficiency while profiting off his indigent proselytes, selling his flock their signature suits and preaching hatred: “Slay four, stab them through the heart, and rewards will be yours.”

Ultimately, tens of thousands would convert to Fard’s new religion, including Elijah Muhammad, who became the leader of the movement after Fard disappeared in 1934. Muhammad backed his authority with deadly force, but the Nation was publicly discredited after the 1965 assassination of its most public critic, Malcolm X, and Muhammad died a decade later. Few continued to listen to the Nation’s hate-filled rhetoric once Fard and Muhammad were gone.

In the decades since, few White Americans have heard much about the history of the Nation of Islam beyond Malcolm’s autobiography. That may stem from the same ignorance of the inner-city Black community that created the environment in which the Nation was originally created. Bailey’s death is a tragic reminder of the toll of ignorance, and Peele is an engaging historian, though his use of the epithet “fictive Islam” to describe Fard and Yusuf Bey’s religious rhetoric is practically a verbal tic. The first half of the book, dealing with the origins of the Nation and the Bakery, is also better written than the more recent history, much of which emerged during the court trial of Bailey’s killers that only concluded in the summer of 2011.

That recent history all took place in Oakland, where grinding poverty and toxic race relations enabled Your Black Muslim Bakery to maintain Fard’s message for decades after its leader had split with Elijah Muhammad in a power struggle. Beginning in the early 1970s, Bey, a former hairdresser originally named Joseph Stephens, carved out a religious domain in the East Bay.

It was centered on a bakery that Bey opened to sell food to members of the Nation, who were prohibited not only from eating pork but many other foods as well. Bey, like Fard and Muhammed before him, preached Black self-sufficiency through business ownership and seemed to support it by hiring people whom no one else would, especially criminals. Dressed in suits and bow ties, former felons baked bread. Bey preached in a makeshift mosque in the back and broadcast his sermons on local television.

It was a cult of personality. Bey used his power and his prophesies to intimidate all his charges into servitude and to abuse and rape the women, girls, and boys in the compound, some as young as ten years old. The women bore him at least forty-two children.

Because the Bakery’s inhabitants—particularly the women—had been trained to regard Bey as a prophet of God’s message, and because they justifiably feared that he would kill them for betraying him, they would not report any of his crimes, even when they involved fraud, murder, and sexual assault. Had the police bothered to check, they would have found a questionable paper trail that followed the various scams he used to prop up his finances. But no one did, and Bey remained a free man.

Bey ran the Bakery for thirty years as a personal fiefdom and harem and was mostly untroubled by indifferent White Oakland politicians, law enforcers, and journalists who stayed away due to cowardice and racism. Because the police had no interest in expending resources on Black-on-Black crimes, and the local daily newspaper had no interest in covering the poor African American community, Bey’s crimes went unpunished and unreported. What little attention Bey did receive in the White community was positive, such as when the former and current governor of California, Jerry Brown, came on multiple occasions to the Bakery to obtain Bey’s endorsement.

Neither the Bakery’s continued existence nor Bailey’s murder would have been possible without the noxious mixture of oppression, poverty, and crime in the African American community in Oakland. The prisons produced a continued stream of new recruits and emboldened Bey and his sons to act with impunity, so certain they were that they would never be held to account.

That finally began to change toward the end of Bey’s life. Newspapers reported a sexual assault accusation that had been made against him. Then, Chauncey Bailey, an African American and Oakland native who had long been sympathetic to the Bakery’s stated goal of Black empowerment, revealed that Bey had been diagnosed with HIV. Bailey’s stories were not especially hard-hitting, but they landed him on the family’s radar.

At that point, Bailey’s career was in serious decline. After a decade at the Detroit News, he had come to the Oakland Tribune but was fired over a series of ethical breaches, most involving his attempts to supplement his low reporter’s income. He eventually landed at the Oakland Post, a free weekly targeted at the African American community. Four years after Bey’s death in 2003, his son and namesake Yusuf Bey IV sent an assassin to kill Bailey in preemptive retaliation for a story he was writing about the Bakery.

Few could have been better positioned to write this history than Peele. As the leader of the Chauncey Bailey Project, a group of reporters that gathered after Bailey’s death to try to tell the comprehensive story, Peele had access to a great deal of information, some of it leaked during the trial of Bailey’s killers. The author is also clearly passionate about the need to protect the First Amendment against intimidation.

But Peele can’t always keep himself from condescending when referring to Yusuf Bey and his family. He writes that a burial spot for one of the Beys’ victims was “moronic” (206); at another point, Peele describes a botched kidnapping by Yusuf Bey IV as “a combination of hubris and brazen idiocy” (237). He occasionally descends to moral righteousness as well. After describing an assault committed by Bailey’s eventual killer, Devaughndre Broussard, who had grown up with a drug-addicted single mother, Peele writes: “Broussard deserved time in jail for the beating; it should have been longer. No one, though, deserved a story like his” (34). Such editorial comments detract from the story itself.

But these are minor complaints. Bailey’s killing is a remarkable story, and while Peele’s prose has occasional flaws, it is still first-rate journalism. The urban decay and virulent racism that empowered Your Black Muslim Bakery for half a century finally erupted in a hail of shotgun blasts just five years ago.

It is remarkable to consider that a Black Muslim cult operated openly in one of the largest metropolitan areas in the country, the San Francisco Bay Area, until just a few years ago. But it happened because a large population was both economically and politically disenfranchised, and Your Black Muslim Bakery arose to fill the power vacuum. In doing so, it was not much different from an ethnic organized crime syndicate, a street gang, a protection racket, or a tribal caudillo. The form it took was bizarre—a bakery cult—but the reasons it lasted for forty-five years were commonplace: racism, poverty, ignorance, and silence.

A book like this cannot counteract racism and poverty, but it can fight silence and ignorance. Though this book comes too late for Chauncey Bailey, this story urgently needs to be told.

Alex Remington is a 2013 Master in Public Policy candidate at the John F. Kennedy School of Government at Harvard University, focusing on journalism. He writes for Journalist’s Resource at the Shorenstein Center, occasionally contributes to the Nieman Journalism Lab blog, and is a 2012 participant in Arizona State University’s News21 program.